Detentionaire Wiki
Register
Don't have an account?
Sign In
Advertisement
in: Characters, Locations, A Nigma High,
and 2 more

Alexander Nigma High (more commonly known as A. Nigma High) is the school Lee Ping attends and is the main setting for the series. It was founded by the school's first principal, Alexander Nigma, in Toronto, Ontario. It was also the site of the prank that Lee was framed for, which kicked off the start of the series.

The school seems to serve as cover for an underground laboratory, which seems to involve experiments that closely relate to Lee Ping, The Red Tazelwurm, and Coral Grove. 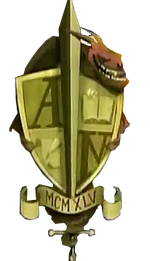 The Students of the school follows a form of social order based on appearance and their abilities:

Lee studying in A. Nigma High

The Forbidden Halls, where the 15th Graders dwell