Sue and Alfred Ping met in Korea where they had their first son, Li. Two pictures of them where taken at the time, one of which Lee finds in "28 Sneezes Later", assuming the infant on the picture was him.

After their firstborn was kidnapped, the Pings fled from the country, hiding and hoping for a peaceful life. They settled in Canada where they eventually had Lee, the second son, and hid the truth of their involvement with MWF from him.

When the Tazelwurm brought Lee down to the underground laboratory, it was revealed that Alfred was a scientist working there, thus revealing that he is a part of the conspiracy surrounding his son, Principal Wurst and The Prank.[1]When Lee asked him about his appearance at school, Mr. Ping told his son that he got there by tunnels stretching under the whole city. They were the remnants of an old subway complex, and he highlighted how dangerous they were and that they should be avoided[2].

In season three, after geting from his mysterious flight, Alfred was targeted by The Council, notably the Serpent, in "Fight or Flight", however with no real intention to harm him as this was mostly a warning to Lee.

In the mysterious photo that Lee found in "28 Sneezes Later", it is seen that Mr. Ping has the same arm tattoo as Lee.

It is revealed in "Serpent Strike" that Mr. Ping knows something about the conspiracy and is trying to infiltrate Mann, Wurst, and Finnwich from the inside. 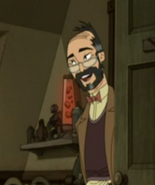 Alfred tells Lee that he is freed

Alfred was looking for Lee and found him 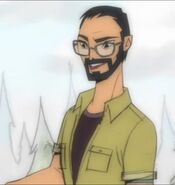 Alfred with Sue and a newborn Li

Retrieved from "https://detentionaire.fandom.com/wiki/Alfred_Ping?oldid=39248"
Community content is available under CC-BY-SA unless otherwise noted.