The Blue Tazelwurms are minor antagonists in Detentionaire. They were once protectors and safekeepers of the Pyramid, but had recently become slaves to the Coral Grove cult due to the group's cyborg enhancements.

The Blue Tazelwurm species has been living since the ice-age. Carl Brocher's tribe (possibly the Yellow Tazelwurms) entrusted a Blue Tazelwurm and a Red Tazelwurm with the safe keeping of one of the two keys which allows the Pyramid to be opened.

Underneath the Green Apple Splat Factory there were at least two blue robotic (or cyborg) Tazelwurms that guarded the lab underneath the Factory. It is believed that they were killed by Barrage saving his students when he electrocuted them and smashed them against a wall.

Other Blue Tazelwurms also dwell under the school,  guarding the Pyramid in the laboratory beneath the school. They have however become cyborg-slaves to the Coral Grove cult, acting like guard/attack dogs.

With aid from the Red Tazelwurm Lee Ping returned to school in hopes of finding Barrage.

Somehow the reprogramed Blue Tazelwurm Cyborgs' implants were overwritten and they turned against the Mann, Worst and Finnwich organization. The Serpent than defeated the Cyborgs while the unnamed Council Member applied their first key and a replica. However the pyramid rejected the opening with the faux key, causing it to explode and further anger the Tazelwurms present. While the Serpent covered their escape, the Council fled the scene.

The Blue Tazelwurms remained out of the Council's control due to interference from the Pyramid forcing a large group of Hazmats to hold them off while the Council attempted to open the Pyramid. In the chaos Lee Ping managed to sneak in and steal back the keys.

The Tazelwurms retreated once the ray of light from the solar eclipse hit the Pyramid.

Eventually the Blue Tazelwurms were taken over by Carl Brocher who reactivated them to take back the Pyramid. Finnwich however, was able to deactivate them by playing a mysterious song left for him by A. Nigma. Their current status is unknown.

Out of the darkness... 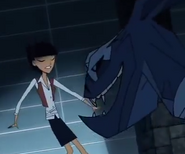 Lee vs. Blue Taz
Add a photo to this gallery
Retrieved from "https://detentionaire.fandom.com/wiki/Blue_Tazelwurms?oldid=37797"
Community content is available under CC-BY-SA unless otherwise noted.