Brandy Silver  used to be a member of the Glamazons, the popular female elite of A Nigma High. She was also the self-proclaimed girlfriend of Lee Ping, though, now she is dating Camillio Martinez

Brandy is the newest member of the Glamazons, better known as the popular and pretty elite of A-Nigma High. In order to keep her new so-called friends satisfied with her social status she has blackmailed Lee Ping into a relationship with her, who since The Prank has become the single most popular student in school.

Lee has occasionally used the relationship to his advantage: Brandy provides him an opening to suspects he wouldn't normally have such as Steve. At a party celebrating her new social status Brandy blackmailed Lee into attending the party using the knowledge that he's been sneaking out of Detention to her advantage. During the party Brandy finally gained acceptance from Kimmie the leader of the Glamazon's.

It would appear that Brandy (or rather her family) was also involved with the Prank conspiracy: her mother has a login to the Coral Grove website, which serves as the base of operations of Vice Principal Victoria's cult. It is greatly implied that Brandy doesn't even like Lee, for a short amount of time she constantly mispronounced his name as "Leaping" and when he

kissed her she went into shock stating that it didn't feel right, and before the prank she refered to Lee as Holger's "loser friend".

Later on, after she and Lee got to know each-other better, she took the liberty of making sure she pronounced his name right, implying that she at least gained some respect for Lee. However, she's also come to view Lee as a liar as he can find time to sneak out of detention every day and steal the spotlight in the play but doesn't have time for their faux relationship.

Brandy is also growing increasingly jealous of Lee's friendship and budding romantic relationship with Tina Kwee culminating in a short cat-fight between the two before Lee broke it up. Brandy has broken up with Lee following a staged fight between Camillio and Lee in which Camillio won, going to the Patsy for Hire concert with him.

Brandy has begun to pull away from Lee due to their strained relationship, however Brandy has also tried to make it work going so far as to accompany Lee while he was investigating Biffy for the Prank. Ultimately however she began to develope mutual genuine feelings for Camillio Martinez going so far as to ask him out to the dance (though it's implied that The Prank Song research project had a role in it).

However their relationship hit a sour note when Camillio, under the influence of the Prank Song, instead asked out Kimmie. Luckily however not only did Brandy realize what was going on with Camillio in time but also joined the group of Holger, Camillio, Greta Von Hoffman and Biffy Goldstein as they went all out to foil Vice Principal Victoria's plans for world domination; ultimately going to the dance with Camillio.

Brandy supports Cam as he runs for President. After he is elected they are officially dating. But once Brad starts trying to steal her and Greta from their boyfriends, she immediately goes along. Later she reveals that she was not interested in dating Brad, she just wanted the publicity for the Glamazon vote to become the next leader. She is afraid Cam will be upset by this, but instead he is impressed by her political "killer instinct", and the two of them make up.

In "The Common Denominator" the Glamazons vote on who will become their new leader. Brandy tries to claim the leadership position, but Kimmie cows Druscilla and McKensie into voting for her. When she sees Brandy's one vote for herself, Kimmie ejects Brandy from the Glamazons for insurrection.

Later, Brandy seems to give up on ever being popular despite Camillio trying to be positive. She along with Cam gets sent to rebuild the Pyramid with the rest of the student body. Cam manages to pull a distraction and they both got out: to their surprise, they find a crystalized principal Barrage who demands that they decrystalize him. Together three of them crystalize the cleaners and Wurst clones underground to stop their plans of rebuilding the Pyramid and exploiting it. After the conspiracy seemingly ends, Brandy and Cam celebrate the victory and kiss.

To keep up with her newfound popularity as part of the Glamazons, Brandy prefers to maintain the image of a stereotypical spoiled rich brat: sarcastic, vain and full of herself. However it appears that underneath the shallow facade Brandy may just be more than meets the eye. In a stark contrast to the snotty diva reputation she is deeply insecure and seeks acceptance from her peers, the reason why she joined the Glamazons in the first place, accepting their conceited rules and self-interested policy. Brandy is actually shy and self-concious of what the others think of her, but hides that with light-headed acts of over-confidence, going out of her way to impress people. Brandy certainly has a dramatic flare and acting skills to compenstate the obvious self-doubt.

Despite the public image, Brandy proves to be a clever and creative girl. She is nice to people who treat her properly and is quite thoughtful to her friends, acting attentive to their likes and dislikes as proven with how she remembered Lee's favourite treats and details like eye colour. Brandy becomes just more and more confident with being herself after she finds a loyal friend in Cam, whom she develops very warm feellings to later. 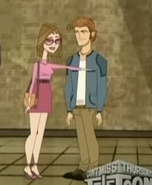 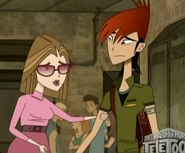 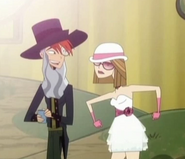 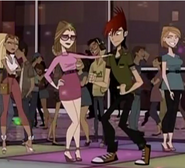 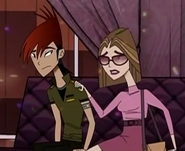 Holger telling Cam and Brandy that Lee has been expelled