President of Mann, Wurst, and Finnwich

Head of The Council

The Dance Part 2
Cassandra McAdams née Mann is The Council's leader, and Kimmie's mom. She is the main antagonist of the third and fourth season. Cassandra is the head of 2 groups such as: The Council (The Parents Council) and the Mann, Wurst, Finnwich Company.

Cassandra, as Elizabeth Mann's granddaughter, made her money as a powerful and ruthless boss of Mann, Wurst and Finnwich; she is very rich now and lives with her only daughter Kimmie in a big mansion equipped with security cameras, kitchens and other modern furniture and grandeur. She has a secret room where she does her spy work for the world domination and holds meetings with other Council members there.

In the past Cassandra, under His Eminence's orders, arranged the kidnapping of baby Li Ping, completely, however, unaware of his family's connection to MWF. She apparently took care of the child, raising him to be an assassin and Council's loyal bodyguard, but was also unware of grown Li's personal agenda against her.

Cassandra's on-screen appearance occured in "The Dance Part 2". She ordered to take Vice Principal Victoria away to Coral Grove after her failure of presenting the brainwashing project. She then undid the hypnotism that was affecting nearly every student at the dance but removed any memory they had of being hypnotised, ensuring The Council's existence remained a secret. The only ones who remained their memory of the events were Lee Ping and Biffy Goldstein. Cassandra took notice in Lee after she saw him being unnaffected by the Prank Song, telling him to stop worrying about Barrage or Lynch for the moment and just enjoy the dance, before disappearing into the shadows.

In seasons three and four Cassandra's role of the antagonist expands more and more and she makes more frequent appearances.

For a moment, in "Date With Destiny", it seemed like she was helping Lee and his friends, and then when asked she revealed her plan of stealing reptilian technology to get even richer, after which her daughter Kimmie realized her true nature and crystalized her to stop her.

Cassandra is the embodiment of the image of a successful businesswoman: powerful, confident, highly intelligent and resourceful. Her spotless public reputation is a great cover of her dirty deeds as the head of MWF, the billionaire company that owns everything, everywhere. Cassandra appears squeky clean and thoughtful but it only fools the public into thinking that she is an honest woman. In fact, when something doesn't go the way she planned, or a minor inconvenience occurs, Cassandra's patience melts away and what's left is a highly impulsive, harsh, unforgiving and manipulative person.

She is not above threatening people to get her way as seen in "Fight or Flight". Despite the dubious nature of her deeds, Cassandra keeps her beloved daugther, Kimmie, out of the drama. She keeps MWF's plans in secret and appears to be lying to Kimmie about nearly everything she does in the shadows, what creates a certain tension between the mother and daughter. Cassandra mercilessly gets rid of people whom she sees as 'troublesome' or dangerous, and isn't above using violence.

Cassandra is the powerful head of the Council, what seems to place her in charge of several big cooperate businesses including Mann, Wurst and Finnwich and all reaper-Mats. She has claimed to even have hold of politicians in "Fight or Flight", as well as controlling stock markets and anythig imaginable.

In "Band of Heroes", Cassandra demonstrates impressive fighting abilities and even revealed she has trained the Serpent. Should be noted that her skilled fighting was mostly done with a help of a mechanical suit, apparently constructed by Mr and Mrs Goldstein, which grants her the ability to fly and shoot beams like those of reaper-mats. 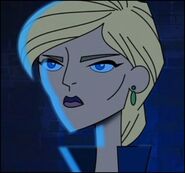 The headquaters of MWF in McAddams house