Start a Wiki
General
Script
Chaz's Corner is the second part of the Season 1 finale of Detentionaire. It aired in Canada on April 5, 2012, alongside The Hair Incident.

"I am Holger Meister, friend of Lee from school. Lee make school go kaflufelshoop with prank, but really no! But Lee took blame when his most pretty bag was eye spied at the scene of the crime! So now Lee must make with the super sneaky spy escape from detention to discover who did prank. But Holger eye spied Cam with the bag same as Lee! Could Cam buy same one to make switcheroo during the Prank? Holger not know but no want to tell Lee or friendship go poof! Then Holger would make with the very big cry!! DUN DUN DUN!!!"

Lee is packing for school, while thinking about Radcircles and promising that he will discover his identity today, and learn everything about what is going on with him.

Lee and Holger are on the bus, Holger extremely tired from watching the security footage the day before. Holger opts not to tell Lee about his discovery, instead claiming he was preoccupied by a horror movie. Holger "just for joking time" asks Lee what he would do if Camillio turned out to be Radcircles; to which Lee would "vaporize him by shooting him into the sun, then take the vapors that was once Cam, freeze them into a solid and then smash that into a billion pieces with a hammer."

Camillio meets Holger and Lee at the bus stop, Holger slightly afraid of Camillio. Lee and Camillio recap the horror movie in which a fast food boy was replaced by a killer robot and Camillio uses his new "Voice 8000" app to pretend to be said robot And lee taught he was rad circles

Holger over-reacts and is lead to the conclusion that Camillio has been replaced with a robot, like in the film.

Lee notes that Camillio's voice sounds just like Radcircles under the effects of the app leading Lee to the conclusion that Radcircles is disguising his voice using the same thing. Biffy Goldstein accidentally knocks another student into a locker and Vice Principal Victoria decides that with regular detention failing, she will instead give Biffy until the end of the day to complete a essay explaining why he just can't stay out of detention.

During class Lee discovers that Camillio's voice app is fifty dollars and wonders where he got the cash to buy it. Holger suggests that Camillio didn't buy it, but is in fact a robot double though Lee laughs off the paranoid guess. During the morning announcements Chaz Monerainian reveals what his big scoop is, the prank footage revealing some embarrasing secrets about the student body.

Radcircles calls Lee during class to tell him that Lee will never get to see the tape, while Lee accepts. Lee is able to get excused by Mr. Langhorne for a bathroom break.

Instead of going to the bathroom Lee heads to the news room to talk to Chaz. Chaz reveals that he is the mysterious figure that Lee chased for the camera on Day 1. Lee demands the footage but Chaz claims that he will just have to wait to watch it tomorrow like everyone else. As if on cue, Principal General Barrage and the Cleaners barge in to confiscate the prank footage.

Barrage catches Lee almost immediately, but luckily he has more important issues to deal with. Tina takes the footage and refuses to hand it for the sake of "freedom of the press".

Lee meets up with Biffy in detention, Lee asking him to plug in the footage, having snagged and replaced it before Barrage could grab him. Biffy plugs it into his computer so they may watch it, completed with Lee sending Radcircles a victory taunt. Instead of the Prank footage, the memory card contains a video of Chaz in his makeup room.

He realizes that Chaz switched the memory card before Lee could switch it on Barrage, and that he still has the prank footage. Camillio and Holger meet outside Camillio's locker, Camillio concerned that if the footage goes public Lee's new reputation will flush down the toilet. Holger however, attacks Camillio trying to expose his robotic nature, running away when he thinks Camillio is going to explode.

Barrage and Victoria are attempting to force Tina to hand over the footage of the Prank. Claiming that it is school property and asking her if sticking up for Chaz is really worth it. In the Lunch room Brad Von Chillstein and the others agree that they have to get the Prank footage back or else face humiliation. Camillio offers to get the footage in exchange for a permanent place in the in-crowd.

Holger attempts to expose Camillio's robotic nature with a giant magnet, failing miserably. With the mention of "butterscotch" ice cream, Camillio begins acting like a monkey, leading Holger to the conclution that Camillio is a robot monkey. Thanks to Kimmie McAdams's game of Go-fish, specifically the mention of the "Queen of Hearts", Camillio is turned back to normal.

After lunch Camillio attempts to ask Lee to get the footage. He see's Lee holding a memory card, but when Lee tries to explain that it is the wrong footage Camillio takes off.

Victoria and Barrage have yet to get Tina to hand over the footage. Barrage coaxes it out of her by threatening to post a message on her permanent record, Tina complies and in the process they discover the card contains more of Chaz's makeup room antics. Tina swears her innocence pointing out that they saw her take the card from the computer and realizing Chaz duped them.

Camillio gives his card to the others only to discover that it's of Chaz in the makeup room, the others give Camillio one more chance, promising that if he fails he'll be obliterated from the social society. Barrage orders that Chaz hand over the footage over the PA system prompting Chaz to go into hiding.

Lee reports to detention, Biffy has slow progress on his essay. Camillio comes in and asks why Lee let him take the fake footage to which Lee explains that he tried to warn him, twice. Biffy tells the duo that the best way to solve their mutual problems is to split up and find Chaz. Mostly to stop them from breaking his concentration.

Chaz is hiding from the Jocks when Barrage puts the school into lockdown. To add man power to the search Barrage promises a reward to whoever can find and bring him Chaz. Lee eventually decides that the easiest way to find Chaz is to call his phone and follow the ring, quickly finding Chaz hidden in a nearby locker.

Lee offers to get Chaz out of the school safely in exchange for the chance to analyze the footage, and Chaz reluctantly accepts the deal. Meanwhile Barrage, Victoria, and Tina are watching the school being torn apart by the student body looking for Chaz, Barrage calling it "Democracy at work".

Lee brings Chaz to the Library, planning on taking the secret passage way out of the school, Chaz however blows their cover forcing them to resort to plan B. They simply air the footage all over the internet thus eliminating the reason why everyone is after them. Meanwhile Holger is in the bathroom filling a squirt gun and promising himself he will expose Camillio as a robot.

Chaz and Lee begin the broadcast, the process slowed down because of Chaz's insistance that he adds a intro. Tina is able to use the footage to pinpoint Chaz's location to the first floor science lab. With that done Barrage cuts off the power to prevent the broadcast. Even with the school shut down, Lee is able to see Camillio switching his bag during the prank.

The student body confronts Chaz and Lee inside the lab, Camillio is able to retreive the footage but a bearhug from the student body accidentally destroys it. Barrage lifts the lockdown but has unfinished business with Lee. Not only is he out of Detention, but he also has helped Chaz avoid the authorities, thus Barrage promises that Lee will receive real pain for Detention from now on.

Holger soaks Camillio with his water gun, and when he doesn't short out he realizes that he is not a robot after all hugging him with joy. Lee is left to wonder why Camillio switched his bag.

Lee is in his bedroom talking to Camillio and Holger, via video chat. Lee trying to ask Camillio about the prank but is interupted by his mother, instead saying goodnight to Holger and Cam. Right after Lee closes the video chat browser, Radcircles appears on his screen. Lee accuses him of being Cam, but Radcircles laughs him off. Leaving Lee to wonder if Camillio would really pull the prank for popularity.

Lee getting confused when he sees a tired Holger 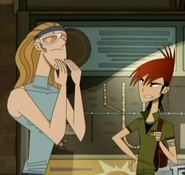 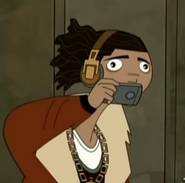 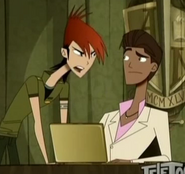 Barrage commandes Tina to give him the footage

Lee gets the footage...

...But gets something a bit wrong!

Lee records a message for Radcircles 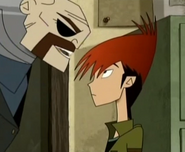 Lee notices Cam with the bag he bought

"Cam couldn't be Radcircles...Can he?"

"I would feel that way too if I was in your shoes,Miss Kwee"

"Of course,I already am"

"Duuuude! I got the wrong footage!"

"That was mostly my fault and alot of Gravity's!"

Add a photo to this gallery
Retrieved from "https://detentionaire.fandom.com/wiki/Chaz%27s_Corner?oldid=38110"
Community content is available under CC-BY-SA unless otherwise noted.