Blitzkrieg Bop'd
Chaz Monerainian is the narcissistic senior anchor of the A Nigma High news. As they are both on the News Team, Chaz is known to have conflict with Tina Kwee, and they are constantly pushing to "out-scoop" each other. Chaz's high demanding personality seems to come from his father, Dash Monerainian, who is a sports anchor.

Chaz is the senior news anchor at A Nigma High. Two years in a row he's played the lead role of Alexander Nigma in the school play, though was beat out of the role by a man known only as El Beardo.

Chaz and his rival Tina Kwee are always on the scene when news is being made, whether or not they take a break from arguing with each other long enough to actually report it is another matter. The two constantly bicker on who gets to report the news and while they're arguing they usually miss the actual news when it is happening. During the first episode Chaz broke into the auditorium after school and stole the Prank footage.

It has become a bit of running gag that Chaz is oblivious in the news, usually spraying his hair with hair spray, that he is painfully injured by it (Ex: Kicked in the crotch by Tina and later Brandy, plowed over by the football team, stomped on by Barrage, falling down a flight of stairs, brainwashed by the Prank song, knocked aside by Steve, etc) yet always gets up just to be knocked down again.

Chaz believes he is greatly respected by the rest of the school, in reality most consider it a insult to be so much as compared to him. As Lee Ping once noticed, Chaz is surprisingly fast able to get out of his makeshif military fatigues and into the news room a sizable distance away within seconds. (" 15th Graders")

Chaz eventually revealed that the footage was in his possesion which contained several embarrasing photo's of the students of A Nigma high. Principal General Barrage attempted to confiscate the footage but quick thinking on Chaz's part prevented Barrage from getting it. Barrage subsequently put a bounty on Chaz's head for the footage and eventually captured him, suspending him from the news team. Chaz's plot to humiliate everyone in the school only further serves to lower everyone's opinion of him.

Chaz correctly comes off as a pompous idiot, arrogant in all things little in actual substance, he seems to be based off of the stereotype of a news man, overly vain and egotistical. He is constantly spraying his hair with hair products and freaks out when he's separated from them, going so far as to refer to it as a crisis ("Jock and Roll High School"). This only furthers his own vanity and egotism, and his blind belief in his own popularity tends to make him overestimate the skills he does (whether or not he is actually proficient in them).

Whenever he is usurped from the spotlight he throws an idiotic tantrum and holds grudges against said person, going out of his way to try and regain what he didn't have to begin with. This is shown by his constant harassment of Tina on public TV and in Public places, and his personal grudge against "El Beardo" for stealing his place as star in the school play. In fact Chaz was so over joyed with Tina's departure from the News Team that he told his own viewers to celebrate it. Despite this, it is note worthy to note that he can actually underestimate himself in some of his own skills, while he believes that he is not very physical he was proven himself to have a decent proficiency in it; it is his own blindness and ego that causes him to miss his strengths and go after his weaknesses.

While Tina views the world as half full Chaz sees it as black and white and blatantly reports any gossip that he comes across whether or not he thinks it's actually true. This tends to be his downfall and pathway to gullibility, as scene when he believe several random things that are obviously not true; As noted by Tina Kwee, Chaz is never right in anything he says, anything he does say is the end result of paranoia and hysteria, the infamous "Space Zombie Flu" incident being a chief example, and the most dramatic of all being believing that the eclipse was a sign of doomsday, followed up by being fooled into thinking that aliens were invading via an obvious lie told by Camillio Martinez. After this his own twisted mind seems to fill up the gaps in random and illogical ways, such as attempting to make contact with the aliens on the school broadcasting system, and believing that a high powered telescope is a super-weapon, and that a professor was being manipulated by the aliens ("Pyramid Scheme").

Though he also tends to overreact he is quite cautious and sly towards compensating for his story (though this borders on overcompensating, it is more caution to secure his story on his part), as seen when he had got signed contracts from students in the school for legal backup in interviewing the Student of the Week ("Skate or Die").

Despite his status as a reporter (though he is a gossip reporter at that), but going along with his "Black and White World" ideology, he tends to ignore conspiracy theories (especially the ones presented by Tina) and usually reports on things that he believes are more important (though they are usually irrelevant in the grand scheme of things) ("Return of the Ping"). He himself doesn't even care about the truth but instead only wants to report on the school status and popularity of the students.

In fact, like many gossip reporters, Chaz has no sense of personal space and tends to be rather intrusive and demanding for a local gossip scoop, annoying them to no end just for that soul reason, even if people are more interested in other things at the time, chiefly when he hid in a locker and awaited for Cam and Brandy to come by to get the scoop on their misery and enjoyed the cat-fight that ensured between Brandy and Kimmie McAdams, feeling it was a cat-fight scoop. His vanity is also shown when he thought that Kimmie's lipstick was newsworthy, when he was supposed to be asking questions on who people think will win the student of the week.

This is his blindness towards a bigger and more important scoop, always being in the right place at the right time, but is too distracted by his own petty problems to notice or care, (though sometimes situational events tend to also get in the way) it should be noted that Chaz has almost always been near a good scoop but never goes after it, preferring to go after gossip that is seldom true or a vain irrelevant answer (Kimmy's lipstick).

As the chairman of the News Crew, Chaz has authority over all lower ranking members of the News Room, and it is believed that he is the co-leader of the News Crew with Tina Kwee. (Skate or Die). As of Tina's expulsion from the News Team Chaz now has full dominion over the clique and the power to censor and edit anything that the new room reports on (meaning that now the priority of the News Team is gossip instead of news.)

Chaz's physical abilities are surprisingly well developed and above average. Chaz is extremely fast, as Lee Ping noted that he ran a sizable distance (his makeshif military fatiues into the news room) within seconds. Chaz is also very durable he has been able to take considerable damage such as a paint falling on his head, kicked by both Tina and Brandy (in the crouch) knocked aside by Steve and the football players (Jock and Roll High School) even being stepped on by Barrage's robotic prothetic, and still retain minimal damage.

As stated, he also seems to be knowledgable about lawsuits and contracts. (Skate or Die)

Chaz's big ego has led him into believing that he is a popular and respected member of the News Team. This, however, is very far from the truth, and most see him as a nuisance (at best), and at worst just a zit on the school (at worst). Whenever he tries to interview someone he is either blatantly ignored or physically assaulted. While people on the News Team are forced to "Respect" him as thier leader, they are much more willing to be with the far more competant Tina Kwee and her conspiracies than with Chaz and his half-baked ideas of news. With the possible exception of Stepak, who is more interested in just filming than Chaz's news, is one of the few people who have yet to show any open animosity to Chaz.

Tina and Chaz are co-anchors on the news, and Chaz is not happy with sharing the spotlight of the News Crew with her, and has made it a personal agenda to outshine, and get rid of Tina. On the first day of school Tina was so nervous that Chaz took a sadistic pleasure in finishing her sentance and introducing her. ("Blitzkrieg Bop'd") He was also extremely irritated with Tina when her logic, made Brad think twice about admitting to have pulled the second Prank.

Over the course of the series, Chaz has sought out to  do Tina and get the scope of the century with an exclusive from the Prank Master: Lee Ping. ("Blitzkrieg Bop'd" "Friday Night Bites" "Skate or Die") After revealing that he had the Prank footage in his position he became a target to everyone in the school, Lee did his best to help Chaz to safety and as such they may have grown a bit closer. However Chaz cares very little about anyone but himself and sees Lee as just another student that he needs to interview to secure and maintain his status (which doesn't really exist). Still as a popular student Lee Ping has Chaz's respect, especially for the Prank, and is a bit envious of his success. This does not stop him from taking advantage of Lee's situation for his own benefit, trying to secure an interview when he is expelled (the Dance Part 2), nor does he really care about Lee as an individual, for when another epic Prank was pulled he preferred Brad Von Chillstein over Lee considerably, especially when he got the interview.

Twice now Chaz has attempted to get Lee on camera, only to be ditched because Lee as not supposed to be there, and Chaz has almost busted him on those two times, not caring about the consequences that Lee might face. ("Friday Night Bites" and "Return of the Ping")

Chaz holds a deep anamosity towards El Beardo and thinks that he stole his role as star of the play for the reason that he was the star last year. Chaz is unnaware that El Beardo and Lee Ping are one and the same. ("Disco History Times")

Holger was the choreographer in the school play and as such, was Chaz's superior and directed Chaz though the course, much to the latter's chagrin. ("Disco History Times")

Chaz in the news room

Chaz announcing Lee has been expelled

Chaz crashing into the door 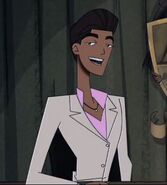 Add a photo to this gallery
Retrieved from "https://detentionaire.fandom.com/wiki/Chaz_Monerainian?oldid=37972"
Community content is available under CC-BY-SA unless otherwise noted.