Start a Wiki
General
Script
Corndog Day Afternoon is the twelfth episode of Season 3 and the 39th episode overall. Lee spends a free Saturday with Tina and Jenny to search the Fairgrounds for Finnwich to ask him about the Book. But once there, they find out he has his own agenda.

"Hey, I'm Lee Ping and I'm trying to stop an evil council from unlocking a mystical pyramid under my school, stop me if you have heard this one. Supposedly the pyramid will only open with two keys, they have one and I have the other. Lynch tried to get mine but The Council kind of busted up our little meeting. That's cause my room had been bugged, and that's how they found where I was hiding my key! So, they sent some ninja dude to come swipe it. They tried again with both keys but one of The Council members got sapped! Then the treats, give up my routes down to the tunnels or else. But I have one ace left up my sleeve. Tina and Jenny have been decoding a book that may explain how to open the pyramid correctly. And get this, it used to belong to Finnwich!"

Lee is rapidly riding a elevator down a shaft, telling it to stop it stops. He finds The Book and soon see's that Tina and Jenny are in trouble, being informed too soon that it's a trap.

Lee is with his parents in their house being spied on by The Serpent. Since Alfred Ping has been gone a while he and Sue Ping have something special planned. For this reason Lee has today, Saturday no less, off on the condition he's home for dinner. For This reason Lee tries to plan a date with Tina, but she wants to take the opportunity to look for Finnwich. Jenny calls and decides to tag along with Tina and Lee.

Lee calls Biffy Goldstein for back up but he's already made plans with Kimmie McAdams. Kimmie gets angry at Biffy for not hiding in the bushes as she instructed, as he's not her mother's favorite person right now. Lee calls Holger but upon hearing his girl troubles he advises him to go find Greta at the mall. Calling Camillio instead Lee learns that he's already made plans with the other blackmail victims.

The latest demand is for the group to pour hot soup onto their lap and send the blackmailer the video, Steve having already completed his video. Grayson proposes that they hack into the blackmailers email account.

Tina and Jenny make a deal, Jenny will not pick her nose, complete with wearing boxing gloves provided by Tina, if Tina will not flirt with Lee the entire day, agreeing to the circumstances they meet with Lee outside the Fair grounds and enter together. At the Mall Greta is helping Steve study his spelling when they are interrupted by Holger, whom provides photographic proof that Steve is a spelling Bee Champion.

Steve admits that he's been acting stupid to spend more time with Greta, having come to genuinely like her. Getting angry with both Holger and Steve Greta storms off, further more Steve grows furious with Holger and chases after him. Meanwhile at the fair grounds the trio go to investigate Finnwich's old tent, while in the Dark Jenny and Tina are taken by someone. Meanwhile back at the mall Biffy and Kimmie are on their "not date."

Kimmie soon grows board but soon receives entertainment in the form of Holger and Steve whom are still fighting/running away. Kimmie decides to "help" the two with their girl troubles. Meanwhile at the fair grounds while Lee is still looking for the girls he is soon attacked by Steam-Mats and is soon dropped down one of their elevators.

The Blackmailed group are saddened to learn that the black mailer has changed his email and his IP accounts, no way to track. Brandy Silver, Furious with Camillio for hanging up on her and not doing what she wanted him to do, has come to the house to yell at him. Having explained to her what's going on she offers her insight suggesting that the blackmailer is a common friend/enemy/frenemy.

Picking up where the preview left off Lee discovers that Lynch Webber has taken the girls hostage.

Kimmie is having a relationship talk with Greta. She proposes that the both of Greta's crushes try out the "Hammer of Love" game to see who likes Greta more. Steve easily wins the contest but Biffy suggests a new challenge. Lynch meanwhile reveals the girls are dangling over a pit of old Green Apple Splat that's gone bad, and demands the Key or else he will drop them in. Lee however explains that he no longer has The key to The Pyramid.

The Amazing Finnwich comes in and saves the girls, explaining that he spoiled Lynch's antics because he's here to help him not screw with Lee. Finnwich explains that his relationship with Lynch is a mutually beneficial arrangement; he protects Lynch from the council and Lynch gives him the location of the Anticus Triangulum, which according to Tina is Latin for Ancient Triangle. Meanwhile back at Camillio's house the group has been talking for 20 minuets.

Deciding that the only thing the group seems to have in common is amazing muscles the group decides to widen their net. Reminded of their third grade teacher Mrs. Rosenbloom Camillio realizes they all had her as a teacher, with five people not being blackmailed, Irwin Dexter, LaGreenor Jonesones, Brad Von Chillstein, Suzie Elliott and Giuseppe Stern and figures that it's one of them.

Unfortunately they got four minuets until the dead line and thus they are forced to go through with the latest humiliation.

Finnwich agrees to guide the group to safety in exchange for the Pyramid's location, which is underneath the school and that The Council is after it. According to Finnwich in order to properly operate the pyramid they need the Manifestum Arcanus which evidently is The Book. Finnwich is shocked that the book survived the fire and that it's been unlocked, a bad sign that the time is near. Keeping the book Finnwich sends the group back to the surface on another elevator.

At the mall Steve and Holger are in the middle of their test, which is eating a platter of corn dogs. Realizing that they only grossed Greta out Biffy grows angry with Kimmie, having been made a part of breaking the hearts of three people in under a hour he goes to talk to Holger. Meanwhile back at the Ping home Lee is watching Camillio's soup video, Camillio reminding him that it's not funny.

The pair dwell over their mutual problems, Camillio vowing to take down the blackmailer while Lee informs him of finding Finnwich again all under the surveillance of the Serpent. Meanwhile Biffy has managed to make it up to Holger by riding with him on the Mall's coin operated pony rides which they both enjoy.

His Manor on Fire 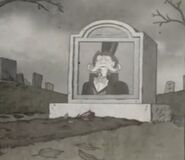 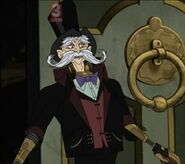 Jenny punching Lynch
Add a photo to this gallery
Retrieved from "https://detentionaire.fandom.com/wiki/Corndog_Day_Afternoon?oldid=37918"
Community content is available under CC-BY-SA unless otherwise noted.