Date with Destiny is the 13th episode of Season 4 and the 53rd episode overall. It is the final episode of Detentionaire.

As the rest of the conspiracy unravels, Lee and his friends attempt to escape Mann, Wurst and Finnwich's evil headquarters, and Camillio and Brandy lead a risky school revolt.

Picking from where the previous episode left off Lynch Webber has brought Lee Ping's group, consisting of Biffy Goldstein, Holger Holgaart, Jenny Jerkins and Tina Kwee, back to Coral Grove. Lee demands Lynch tell him where his mother is whom is apparently locked inside the cloning lab and agrees to take them there on the condition that they go see Maxwell Finnwich first.

Left with no other option the group agrees to allow Lynch to lead them to safety. Meanwhile back at A Nigma High, Camillio Martinez and Brandy Silver free Principal General Barrage, after they have little fun with him, and commandeer a few Crystalizers from the Cleaners. Barrage and Brandy make a plan to first recon The Pyramid room then go in and take everyone down.

Meanwhile His Eminence explains more of his story to Cassandra McAdams. At the dawn of the last ice-age His Eminence's race sought to escape the deadly cold by putting in place various "time capsules" of sorts containing themselves perfectly preserved Cryogenically and he was one of two chosen to reawaken the race, the other died upon awakening due to a unforeseen malfunction.

Under his instruction the four students would go onto found the most powerful company in the world and would gather the world's best and brightest minds, vast wealth, and the most advanced technology all towards the purpose of finding a way to reopen the Pyramid, all he knew was that one of the four's bloodlines would prove critical to reopening the Pyramid.

Unfortunately for him, Ping got wise to his plans and fled back to his home country of Korea, starting a sort of anti-cult to the group. Worse yet, His Eminence realized that it was Ping would be vital to his plans and hasn't been able to find his family until very recently. Sadly for him now that Cassandra knows the whole story she has no intention of letting him re-awaken his race.

Not planning on giving her an option he reveals a group of Reaper Mats under his control and uses them to apprehend her and Kimmie McAdams. Lynch meanwhile is still leading the group to Finnwich, Lee however spotting the way to the cloning lab detours the group there while Tina guards Lynch. Meanwhile His Eminence has called the Wurst clones for an update.

While 89% of the pyramid has been rebuilt they only have one of The keys to open it and no solar eclipse to power it, His Eminence instructs the clones to leave the second key and the Eclipse to him. Barrage completes the group's reconnaissance and proceeds with the operation. Once at the lab Biffy divides the group further when he spots his parents among a group of scientists.

Alone with Lee Jenny asks him if he just came to rescue Tina, Lee states that they came to rescue both of them, leading Jenny to admit that she messed things up between him and Tina and promises to make things right. Finding his Mother's pod Lee is called by His Eminence whom explains that he has been wanting to meet him for a long time now. Meanwhile Holger and Biffy continue to spy on Biffy's parents.

Holger keeps him from going to meet them and as a result accidentally destroys the Reaper Mat arm, giving Holger another idea in the process. Meanwhile Kimmie and Cassandra are being escorted to the cells with Kimmie finally admitting that Cassandra is evil. The Pair reluctantly free The Serpent who agrees to help them get back control over the base.

Meanwhile his Eminence demands Lee's full surrender and Key claiming both are vital to his plans. To secure his cooperation His Eminence releases Lee's mother from her pod. Sadly for his plans Cassandra initiates a hostile takeover of the base using The Prank Song to brainwash the human personal to turn against His Eminence and the robotic staff and bring her Lee Ping.

The distraction buys Jenny a opening to crystalize the Reaper-mats and allows the trio to flee with Lee trying to sum up the long story along the way. Meanwhile The Wurst clones are on the loosing end of the siege of the Pyramid room, one Clone is able to cut a deal with Cassandra to have her turn off Barrage on the condition that he works for her now.

Meanwhile the trio is nearly caught until Holger and Biffy show up armed with Cassandra's armored suit and a crystalizing gatling gun respectively successfully saves the trio reunites with Tina and Lynch. With the group reunited they use the nearest elevator to go directly to Finnwich. After Finnwich knocks Lynch out he attempts to kill both himself and Lee using a force field, claiming that they've both become to dangerous to stay alive.

Salvation comes in the unlikeliest of forms when His Eminence comes in and shuts off the force-field, then imprisons everyone else in force-fields and takes the second Key. Calling the clones for another update he calls just in time to witness Camillio crystalizing the last clone. To this end His Eminence calls in the cyborg Tatzelwurms for reinforcements, luckily Camillio is saved by The Red Tatzelwurm and the rest of the students.

Finnwich is able to distract His Eminence long enough for Lee to grab his control cane before he is imprisoned as well. The group is joined by Cassandra and Kimmie who are armed with Crystalizers as well. With His Eminence refusing to hand over the Key Cassandra simply crystalizes him and takes it, announcing her plans to open the Pyramid, take the technology inside, and make yet another in a long series of fortunes.

However under Finnwich's instructions Lee uses the cane to break free and enters a short fight with Cassandra, whom is reluctantly Crystalized by Kimmie whom states that she needs therapy. With Holger's help Finnwich is able to use the first song ever made, to shut down the Council's remaining forces at the school, leading to a big group hug.

Inside of the Pyramid, however, a trapdoor beneath the altar opens, and out comes the Unnamed Male Council Member. Behind him are legions of the unknown race (the race The Leader was trying to get back to the surface). The episode ends with this cliffhanger, indicating that the conspiracy may continue. 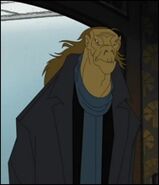 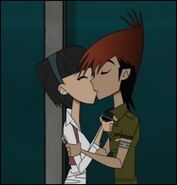 Retrieved from "https://detentionaire.fandom.com/wiki/Date_With_Destiny?oldid=38495"
Community content is available under CC-BY-SA unless otherwise noted.