This page needs a lot more images, which can be obtained through the use of ABC Australia or Teletoon episode viewers. Images must be uploaded as soon as possible.

Detentionaire is a title given to students who are sent to detention. The term is mostly used to refer to long term participants like Lee and Biffy .[1] 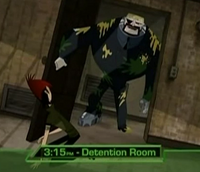 Detention is a form of punishment where a group of students has to stay at school after normal class hours have finished. The students are guarded by a teacher who is assigned by the school.

At A Nigma High detention stretches from 3:15 PM to 4:15 PM[2]. It can also include spare periods and lunch breaks.

At A Nigma high any student can be sent to detention by the school's head office or an individual staff member. The length of their punishment is chosen by the the teacher or faculty who gives the student detention and reflects the severity of the student's actions[3]. The student's punishment will end if the detentionaire can prove their innocence[4].

For long term detentionaires there is a school by-law providing one day of amnesty, although the rule can be bypassed[1].

Detentionaires are treated similarly to criminals inside A Nigma High, often socially rejected and considered possible threats. In some exceptional cases (ie. The Prank) the detentionaire is instead made popular by their exploits and their social status increases as a result of being a detentionaire[3].

Retrieved from "https://detentionaire.fandom.com/wiki/Detentionaires?oldid=37900"
Community content is available under CC-BY-SA unless otherwise noted.