Fence-O-Palooza is the seventh episode of Season 3 and the 34th episode overall.

"I got framed for the biggest prank in high-school history and I found out who set me up for it: Lynch Webber and VP Victoria. VP lost her job big time but Lynch he managed to escape and disappear and from there things have only gotten weirder: Like Kimmie's mom who's the head of the already suspicious parents council. She and Barrage are building this crazy fence around the school. If I can just track down Lynch maybe he can explain everything but how?"

Lee and Lynch are being led through the fair grounds by the Reaper Mats, Holger Holgaart attempts to save them but for his trouble is captured as well.

Lee is in his room packing for school when a Parrot flies in cracking Knock, Knock jokes. Realizing that the bird is connected to Lynch Lee plays along and is told to meet Lynch at the fair grounds at approximately 10 AM.

Lee is on the bus with Holger and Camillio Martinez discussing Lynch. Camillio and Holger explain that Lee cannot meet Lynch alone, he's crazy, insane, and nearly got him killed on more then a few occasions, but Lee has handled him before and he can handle him now. More to the point Lynch has got long awaited answers to many of Lee's questions.

Arriving at school the trio discover that the Fence has been completed and the students are being screened going in. Tina Kwee and Chaz Monerainian interview Camillio demanding to know what he plans to do about the fence, to this end Camillio states that he'll fix everything if the student body would be willing to give him time to do so, in the process discovering that the crowd will chant anything.

Meanwhile Kimmie McAdams tells Biffy Goldstein that she'll be willing to accept his apology but there are a few conditions. Biffy must do it in song on one Knee and on camera. Biffy refuses the conditions. Camillio announces that he is organizing a protest, Barrage gladly accepting the challenge, the students have the right to protest just like he has the right to make their lives miserable.

As a morale booster Camillio has a gent with a guitar play music for the crowd. Barrage deems protest time as free time and therefore detention time and has Lee dragged off for a day of detention. Lee tells Holger to find a way of getting him out of detention so that he can meet Lynch for their 10:00 AM meeting.

Barrage informs Lee that his detention will last as long as the protest is on.

The crowd quickly learn that the student whom Camillio has arranged to play music for them is a horrible singer, he carries a guitar around just to attract girls. Beth leads the crowd to blame Camillio but he promises better entertainment momentarily. Holger attempts to recruit Camillio to help him with Lee but he points that he's already busy. To this end Holger convinces Biffy to help him.

Camillio has arranged for the Dudes of Darkness to play a concert for the student body. Barrage comes in with a brigade of Cleaners claiming that the the student charter of rights say that he may crystallize them and drag them to class. However Camillio gives the book a closer look and points out the charter says Barrage cannot crystallize them, there is a mustard stain on the not.

After Beth runs into him Camillio learns that a letter is in his pocket, instructing him that by 9:00 AM he is to announce to the student body to refer to him as President Camillio Fartinez for now on or else the fact that he cheated to complete his book report goes strait to Barrage and Camillio becomes the ex-president.

Holger and Biffy plant a camera phone outside the detention room, that done they inform Lee part B of the plan is in motion.

Camillio asks Grayson, the student that he's bought the Book Report from, where the blackmailer got the material from. According to Grayson he's not the blackmailer, by revealing that Camillio bought the report from him his once promising school career will also be destroyed. Barrage and his gang of Cleaners now plan to hose the student body, and there's nothing against hosing the students.

Grayson and Camillio burst the hose by stepping on it. The Deadline reached Camillio is forced to make the student body refer to him as President Fartinez, which the crowd finds greatly amusing. Meanwhile Holger and Biffy are covering the Fence with Graffiti images of Barrage in a dress to get them detention, in turn recording the code to the detention room. Luckily Kimmie decides to join in and is caught by Barrage instead.

Barrage brings Kimmie to the detention room, though Lee tries to warn Kimmie about the defenses she soon learns the hard way about the motion activated lasers, electrified floors, and air guns but she doesn't listen. Now that they have the code Biffy opens the door and breaks Lee out. Unfortunately Lee accidentally closes the door and locks Kimmie and Biffy inside.

Lee and Holger discover that the doors and secret passages in and out of the school have all been blocked by the Cleaners. To this end Holger gets a idea and has Lee meet him on the school's roof, Lee suspects that the combination of the words "Fly, Roof, and Zerbroken" can only be bad.

Holger steals the broken hose, meanwhile Cyrus Xavier informs Camillio that another letter is taped to his back, reading it Camillio learns that the first incident was a test, the true goal of the black mailer is to have the protest called off by 10:30 AM or else he'll make the Book Report public.

Holger puts his plan into motion, using the hose as a makeshift grappling hook he makes a connection between the school roof and Ed McFenney's roof and using their belts as a zipline escape from the school.

Kimmie and Biffy are not enjoying being locked together in detention..

Camillio discovers that though the blackmailer managed to forge his signature on the report whomever it was dots their I's with smiley faces. Tina informs "President Fartinez" that in order to officiate the protest they need the signatures of everyone at the protest. Realizing his chance Camillio has the student body pass around the clipboard and record all their signatures.

Lee and Holger arrive at the fair grounds to talk to Lynch, spotting him enter The Amazing Finnwich's old tent Holger stands guard while Lee confronts him. Once inside Lee tackles Lynch to the ground revealing he is bald, further more Lynch reveals that he is not a 16 year old like Lee but is in fact a man over 80 years old. Lynch claims that it was obvious having dropped Lee several clues.

Meanwhile Barrage interrupts the Cleaners activating the security force fields underneath the school. Though he at first tries to stop them the programming block kicks in stopping him.

Picking up where the preview left off Finnwich's Steam-Mats arrive and do battle with the Reaper-Mats. Although the Reaper's outgun the Steam's the Steam's out number the Reapers and they subdue them. Lynch gets away in the chaos.

Camillio has hit a dead end on the signatures, though he at first believes Beth to be the Blackmailer several other people in the school similarly sign their names, further more Grayson reveals he's been blackmailed as well, and not only is his and Camillio's reputations on the line but so are all of Grayson's clients.

Unfortunately Lee discovers that his and Holger's zip-line doesn't work in reverse, they can climb it back to the roof but Barrage is on it planning his next move. Left with no other choice Camillio is forced to comply with the Black mailer's demands turning the public against him, fortunately Cyrus receives similar orders to save Camillio's reputation. Lee requests a distraction from Camillio and he has the perfect one in mind.

Camillio informs Barrage that the protest is over forcing him to leave and thus Lee is able to sneak back to detention. Lee is able to get Biffy to apologize to Kimmie, the latter using her phone to record it. Thankfully Lee re-implements the lock-down along with the phone jammer and thus Kimmie fails to record anything. Once home Lee is discussing their mutual days with Camillio, Lee wondering why The Council is always a step ahead. 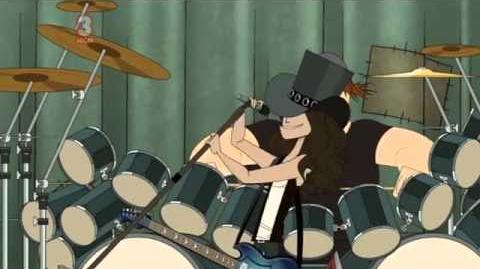