Fight or Flight is the eleventh episode of Season 3 and the 38th episode overall.

"Hey, what's up mini chiquitos and chiquitas we'll going to Cam's uh... crazy loco banana story time with black. Once upon a time there was a stink ninja who huffed and puffed and stole my boy's Lee super handy cool key. Totally uncool Mini muchachos. So Tweedle-Tough, Tweedle-Fluff and yours truly tried to get it back kinda failed though, mostly them, and now the evil Queen and the Council has both keys yo! But the lady in black kinda cracked the Pyramid the wrong way and got majorly whacked by some ancient snooze button. Buenos Nochos senorita which brings us to sleeping Un-beauty AKA Niles Peg AKA the loco who kept taking the book from the library then the pyramid cast the sleeping curse on him too? That's when the junior nerdets Jenny and Tina to figure out. And a Handsome prince found out that the court jester is being blackmailed too so they joined forces to bring light to the darkness man and restore peace and Mucho handsomeness to the kingdom man. What I'm like oozing with handsomeness."

At the airport the Reaper Mats are told to back off a landing airplane when a sniper takes aim at Alfred Ping as he gets off the airplane.

The tenth grade is on its way to a field trip in a bus to the forest. Camillio is not enjoying the prospect of being in the forest but Cyrus is enjoying the idea of being able to get away from his troubles for the day. Holger on the other hand is focusing his attention on Steve who is making time with Greta. Biffy is talking on the phone with Lee about what happened, Lee is explaining the council's lack of sympathy for their fallen member.

Biffy on the other hand is explaining that the guy who stole the Key is major evil villain material, and he seems to be obsessed with Lee's family.

Tina is waiting for Jenny and the Outcasts at the school's entrance. Tina attempts to bury the hatchet with Jenny and offers to help her research the book, noticing that one page has a similarity to what happened to the Council.

Since Lee's first class has been canceled he reports to the detention room where he meets Cassandra and Barrage, Cassandra takes control of Barrage and sends him away. She comments that she controls everything in the school except for Lee, telling him to take it as a compliment and sit down. Cassandra tells Lee to list all the ways in and out of the Tunnels before she leaves. Lee refuses, instead trying to awaken Niles, not succeeding.

Mr. Langhorn pairs up the various students, Grayson and Biffy, Cyrus and Camillio, Holger and Steve and orders them to do reports on various topics. While Holger and Steve go do their squirrel report Camillio and Cyrus receive another blackmail letter instructing one of them to eat a bunch of live beetles while the other films it and to send it to him by 7:30 PM.

Tina is attempting to translate the book, having gone through every book on ancient dialect they can find. According to the Librarian she can translate the book but will only do so privately and orders the girls to follow her.

Lee's attempt to awaken Niles with rock music fails miserably. Cassandra calls demanding the information she requested, Lee refusing, they reveal that The Serpent has a knife around Mrs. Ping's neck. Meanwhile Camillio has one thirty out of fifty coin flips. Grayson and Biffy are working on their Possum report, Biffy attempting to play match maker with the Possum's.

Lee calls his mother asking if she's alright, learning that she is alright she is forced to hang up by the Serpent. Cassandra calls back and Lee is forced to reveal the tunnel dug by the Outcasts at the back wall of the fence and claims that he did it all himself. Cassandra keeps her word to keep Mrs. Ping safe but as retribution for Lee lying to her she is now targeting Alfred Ping.

Meanwhile in the woods Steve and Holger are digging a hole looking for squirrels. When Holger accuses Steve of liking Greta he explains that she's just tutoring him.

The Librarian, instead of translating the book for them, is instead reading them a bed time story. When asked what she knows about the book she claims that it belongs to the owner of a piece of film she's holding on to for. Lee meanwhile is looking for someone to help him save his father, none of the guys or the girls seem to be available and Cassandra hacks Lee's phone into submission. Meanwhile at the field trip Camillio has won 100 consecutive coin flips and thus Cyrus is forced to eat the bugs.

Unfortunately Cyrus can't bring himself to do it. Luckily though Camillio spots several other people also being forced through similar humiliation to their own and Camillio thus realizes that they're being blackmailed too.

Lee attempts to sneak out and get the Airport but he is caught by Barrage. Luckily the council takes control of Barrage and forces him to fill the hole Lee told them about. Lee takes his chance to make it out of the school.

Tina and Jenny are watching a news reel about Maxwell Finnwich resigning as co-owner of the world's largest conglomerate Mann, Wurst and Finnwich followed by his manor being burnt down apparently with him inside. As stated in his last will and testament all of his surviving belongings were given to the needy and his vast literary collection to A Nigma High.

Lee is rushing through the forest on the way to the airport, arriving just in time to see the Reaper Mats getting ready to attack it. Meanwhile Holger and Steve are continuing to dig the hole. Holger has mellowed out considerably since Steve admitted that he doesn't like Greta, though he does admit she's cute, and the two of them have bonded. Unfortunately they hit a sewer main and attract a swarm of black flies.

Picking up where the preview left off Lee runs to the airport roof to deal with the Sniper. Meanwhile Tina and Jenny are interrogating the librarian, though her senility keeps her from giving much information. Lee arrives on the rooftop but in the sniper's place he finds a note warning him that "curiosity killed the cat" and shows that Lee's family is safe. Meanwhile in the forest Camillio and Cyrus have completed the video.

On the plus side Camillio states that it can become a thing for Cyrus, something for free publicity when he's older. Unfortunately they are interrupted by Holger and Steve who are still running away from the bugs.

Jenny and Tina rush to tell Lee about Finnwich at the same time and Lee warns them to watch their backs as the Council means business. While Lee's family goes to eat supper the Serpent is shown spying on them. 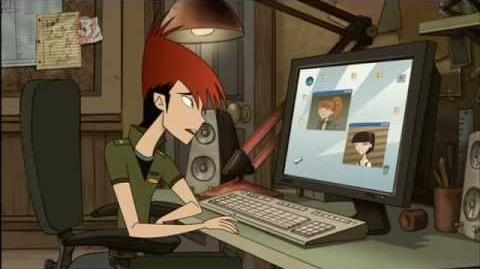