Start a Wiki
General
Script
Follow that Finnwich is the first episode of Season 4 and the 41st episode overall.

When the mysterious Council capture The Amazing Finnwich, Lee and his faithful friends stay in hot pursuit, only to find a whole lot more than they ever bargained for.

"Welcome back conspiracy buffs and pay attention because things have gone from weird, to insane! Once it was all about being framed for the biggest prank in High School history, but that was nothing. Since then I've battled robots, brainwashing, brainwashed robots, ninjas, evil geniuses, evil not-so geniuses and brilliant eccentric dudes who use machines and plastic surgery to try to cheat death. But that's all nothing compared to the girl stuff I'm dealing with. First Brandy liked me, but I always liked Tina! Now there is a new girl in town Jenny and well besides her being brainwashed into picking her nose non-stop, shes pretty cool.

This is my boy Cam, he and some others are being toyed with by some mysterious blackmailer for cheating. Cam never actually handed in the book report, but one still got turned in. So why the set-up? Well, one thing the blackmailes have in common is that they were all in the same third grade class. But none of them know anything about it. And to avoid being turned in and expelled, the latest threat is that they all have to quit one thing they love! Be it sports, being cool or in Cam's case, being prez. Heavy, I know.

Want to know what's not heavy? The gas filled zeppelin over the school. Say hi to Biffy, he's kind of my co-pilot of conspiracy. He mistakenly thought the bad guys captured me and bought me here. And that's his kitty, Rumple Kittykat. So why is this all happening? Probably something to do with this crazy eclipse. It's not an end of the world, alien invasion like Chaz claims, but it does seem to be a prophesied cosmic event that could be the only safe time to open the pyramid!"

"Or hey! Maybe it is aliens. It's not like anything would surprise me anymore.Theres Tina! She kind of got frozen. That's Holger, why is he wearing that on his head? Because he's Holger. So, where am I in all this?"

Lee Ping and The Amazing Finnwich use The keys to open The Pyramid, Lee collecting the Keys as he enters. Once inside Lee realizes that the whole inside of the pyramid is covered in more of the strange language from The Book which Finnwich is able to read using a cipher. Though the present council member wants to know what the pyramid says as well Finnwich forbids him on account of the fact that he picked the wrong side.

However the Council member calls in the Cleaners and Reaper Mats for back up, leading Lee to arm himself with a femur from the skeleton inside the pyramid and attempt to get the council's controls for the cleaners. Meanwhile Tina is still trapped in crystal and screaming for help and on the verge of going insane, she gets no help from the librarian who tells her to be quiet.

Meanwhile Lee only succeeds in freeing the council member from a Reaper-Mat who leaves him to be dealt with while he tries to read the pyramid. Luckily Lee's tattoo allows him to over power the Reaper-Mat and fry it in a security field. Unfortunately Cassandra McAdams and The Serpent show up. Elsewhere Biffy Goldstein is searching for a way to escape Finnwich's crashing blimp, resorting to using a Steam-Mats grappling hook.

Meanwhile the Council corners Finnwich inside the pyramid, but he reveals that he's planted a bomb inside the pyramid set to blow in less than 20 seconds, though Finnwich and most of the council get out in time the unnamed member tries to learn the pyramid's secrets and seemingly dies with them. Finnwich takes the opportunity to plant the book and cipher in the rubble for Lee to find.

Lee gets away with the items while Finnwich, Lynch Webber and Barrage are taken away. Meanwhile Holger Holgaart is still unconscious from the Pyramid's beam, not only does he wake up but quickly runs out of the detention room while Blindfolded claiming he has super powers. Lee free's Tina and calls a meeting with all of his allies in the library to plan their next move.

Meanwhile Cyrus appears to have lost all hope in regards to finding the black mailer before he reveals the information. Cam however spots the fingerprint on the note and is led to believe that if they can get the finger prints of their suspects then they can recheck them, successfully getting Bradley Von Chillstein's prints from a soda he was drinking Cam leaves Brandy Silver and Cyrus Xavier to print the others while he attends Lee's meeting.

At the meeting Lee summarizes what happened at the pyramid, giving Jenny and Tina the book and cipher to try and decode. Cam explains that he has to go after the blackmailer but wishes Lee the best of luck. With Barrage out of commission Lee along with Holger and Biffy plan to sneak down into the Pyramid room and look for answers. While the boys go to the pyramid Tina and Jenny are roped into helping the librarian sort the books.

The boys make it to the pyramid room and spot the tunnel the Council members took their prisoners down. Deciding to save them Holger hijacks one of the cleaners hover craft with Lee and Biffy following him. Unfortunately Holger and Biffy's squabbling alerts the Cleaners and they give chase, discovering at the last moment that the crystalizers they stole are out of juice.

Meanwhile Cyrus and Brandy have gotten two more of the finger prints and thanks to Camillio are able to get Irwin Dexter's prints as well. Deciding to take the prints to Grayson to get a match to the blackmailer, Chaz Monerainian announces that Steve and Trevor Mars are quitting the football team, thanks to the blackmailer, showing that they're running out of time.

Meanwhile the Cleaners are in pursuit of the boys, but thanks to Holger's piloting and Lee's quick thinking they're able to sneak into the Council's base undetected. Meanwhile the girls finish sorting the books and gets their book back from the librarian, after Jenny threatened to plant her snot in all of her books, checking the last page they discover a connection to Coral Grove.

Inside the Council's base Lee and the others spot the Cleaners loading the woman that was put to sleep alongside Finnwich and Lynch onto a submarine for Coral Grove as well as a trio of people whom the Council refers to as "the Experts". Meanwhile Grayson can't confirm any matches on the blackmailer print since it's too smudged and informs the others that he's quitting genius club too thanks to the blackmailer along with Cyrus quitting the DOD.

When asked if he can determine who the experts are with his 'powers' Holger's best guess places Principal Wurst as among them. None the less they decide to rescue the hostages to which Holger has an idea. 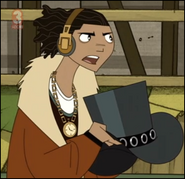 The Pyramid rubble
Add a photo to this gallery
Retrieved from "https://detentionaire.fandom.com/wiki/Follow_that_Finnwich?oldid=38221"
Community content is available under CC-BY-SA unless otherwise noted.