Start a Wiki
General
Script
Friday Night Bites is the fifth episode of Detentionaire. It originally aired on September 16, 2011.

"Anyone with a computer, or at lease one ear, knows that I got a year of detention for the biggest prank in High School history. But I didn't do it! So now I have to break the rules to prove I never broke any rules! Confusing I know. I thought Irwin, the evil Mathlete leader, sent the email telling the Skaters how to pull off the prank. But his email just tried to make me look stupid because of an old grudge. The Prank email actually came from our old missing Principal. I don't know what's more confusing: girls or this whole prank mess."

Lee Ping is across the city running as he comes across a red light. Suddenly, he hears his parents in the car right beside him, and is barely able to hide before they see him. He comments that if he doesn't make it home before they do, he is grounded for life.

Lee, Holger Holgaart, and Camillio Martinez meet up after class. Holger and Cam are happy that is Friday, Lee on the other is not, still confused as to why the Prank emails came from the missing principal's account. Cam tells Lee to put the detective work on hold as they have Brandy Silver's Party to attend, to which Lee reminds him that he is grounded and can't go. Before the conversation can go any-further Lee is late for detention, earning the wrath of Principal General Barrage who gleefully net captures him and drags him off.

Lee is in his room, his parents are planning to go to a production of Sleeping Beauty, with his father asking his wife of Lee, Mrs. Ping reiterates that Lee is grounded and thus can't leave the house this weekend. Cam and Holger call as Lee informs them that he won't go, noting his father is on his side but not his mom. Brandy calls Lee at this moment, mad that Lee hasn't arrived at the party, telling him that it is her first official party as a Glamazon, as Kimmie McAdams informs Brandy of many errors, saying that the party will stink. Brandy blackmails him into attending the party with the threat of revealing that he's been sneaking out of detention. Lee decides that he can't let Brandy rat him out and that his friends are right, he does deserve some fun. He prepares a dummy in his bed and leaves.

Once on the bus, he calls Cam and Holger to inform them he is on his way to the party. He then notes his mother in his room and informs her that he went to bed early because he was feeling tired, and she tells him they will back by 11. Lee and Cam arrive at the same time to Brandy's, while Holger is shown to still be in his house. As they come into the loby, the Mathletes are informed by the guard that without an invite they can't come in. Lee and Cam on the other hand are let in thanks to Lee's popularity as the Prank Master.

In the party, Lee and Cam stand in a corner far away from everyone else, as they witness Kimmie giving Brandy a hard time simply because her drink didn't have ice. Cam tells Lee to talk to Brandy about the kiss, as Brandy yells for Lee. Back in the Lobby, the Mathletes see Cam's latest update of the party, just as Holger comes in, but security doesn't let him upstairs because he stinks (he literarily bathed in cologne) and the "I'm with Lee Ping" excuse has been used already.

Back at the party, Brandy admits to Lee that she needs to impress Kimmie, and asks Lee to have her back. He agrees to deal with Kimmie while Brandy goes to manage the music, once Kimmie notes that she doesn't like it. Holger downstairs leaves Lee a message, as he tries to sneak in, but the guard manages to smell him and chases him inside. Holger goes down through a vent to escape.

Lee notes to Cam that coming was maybe a good idea as many people congratulate him for the Prank. The news crew manage to get Lee on camera but Steve and the Jocks see that he's in a pinch and help him out. Lee tries to text Tina Kwee to meet him in private but in the process he discovers that Holger has sent him 76 texts for help. Lee calls Holger and he explains that he got lost. Lee advices him to fnd an elevator and come to the top floor, but at that moment Holger spots the Cleaners and is chased by them and the guard.

Lee gets mad at Brandy when she once again messes up his name and leaves after telling her off. He bumps into Tina but seeing Chaz coming leaves in a hurry, evading Brandy who is looking for him. He finds a map of the building and calls Holger, who at that moment found refuge in a closet, but before he can tell him anything else, Holger is chased by the Red Tazelwurm and cuts the connection. Cam comes out and informs Lee that he had dissed Tina earlier, but tells him that it was good if he wanted to keep her interested. Cam drags Lee back inside to dance, but Lee doesn't feel up to it, Brandy on the other hand forces him to unless she would send Barrage a voice mail.

Tina finds him but Cam intercepts her as she asks him what is going on between Lee and Brandy, with Cam telling her that they don't even know each other. Unfortunately, Lynch calls for everyone's attention as he dedicates a romentic song for the "cloud nine couple", as a photo of Lee kissing Brandy comes up on the big screen, much to the surpise of both of them. Brandy leaves to attend to Kimmie's demands as Lee marches over to Lynch. He is confronted by a hurt Tina who didn't believe he would be into someone like Brandy. As Lee tries to explain, Lynch plays the music from the Prank, which puts everyone in a trance. Lee soon realizes something is weird as the crowd does everything he tells them to, which includes getting up and down and 'going crazy', which causes everyone to start destroying the apartment. Lee tells them to simply dance and spots Lynch at the controls, getting the tape in the process.

Holger, meanwhile, is still running away from the Taz and the Cleaners. He spots an elevator and after momentarely killing the energy in the whole building, and escaping the guard, goes up. Lynch tells everyone the sound is brought by the Green Apple Splat, and tells everyone to drink some. At that moment, Barrage's voice is heard as the song ends, waking up everyone. Lee is caught once again in camara, and is confused when Stepak doesn't give him the tape as before, theorizing that maybe Barrage's voice had broken the spell.

All of those that hadn't been let in come crashing through the doors, as Cam had told everyone to do so. Brandy tells Lee to fix it, but is surprised when Kimmie notes that the party is a success, and says she is perfect for the Glamazons. Lee comes to Lynch and asks where he got the song, and Lynch informs him Cyrus, from the Dudes of Darkness, had passed it to him.

Lee is able to explain to Tina he had snuck out tonight and that he had tried to avoid being caught on camera all night, telling her he didn't want his mom to see him on the school news. Tina says he should have told her from the beginning, and he agrees to let her interview him. Lynch plays the Prank song again, and puts everyone into a trance again. As it begins, Lee accidentally brainwashes  Tina to "Forget that whole kissing picture". Lee suddenly remembers Holger, and notes he has 203 messages from him. He calls him but is send to voicemail. Holger meanwhile arrives at the roof and is cornered, but he uses a scaffold to go down and finally enter the party, as Barrage's voice is heard and stops everyone's trance once again.

Holger informs Lee that it's past 11 o'clock, as Lee leaves before his parents get home.

Lee makes a mad dash across town only narrowly beating his mother to his room. He asks himself as he sees a video of the Dudes of Darkness if they set him up, as Cam calls and tells him to check the news. Lee puts it in his computer and Brandy is shown speaking with Chaz's father, Dash Monerainian, as she says he was just there. Unfortunately, he hears his mother watching the news downstairs as well, as she yells his name obviously mad, with Lee simply sighing.

While at the party, Tina is interviewing the various guests. Aside from the Robotic butlers she decides that she was never missing anything. She finds a brochure in a desk at the party advertising Coral Grove and while it does sound like a great vacation spot, it fails to mention it's exact location, though Tina now know's that it actually exists.

Still at the party, Tina finds a digital code form on the brochure, which gives her a direct link to Coral Grove's website. Finding Brandy's username and password on the brochure, she logs into the site as her. Once on the site, Tina discovers that Coral Grove is the base of operations of a cult, secret societies, scary looking rituals, grusome experiments, and best of all a picture of Principal Wurst with a dolphin, probably members of the cult. Unfortunately, Tina loses the picture to the hypnotising music at the party. 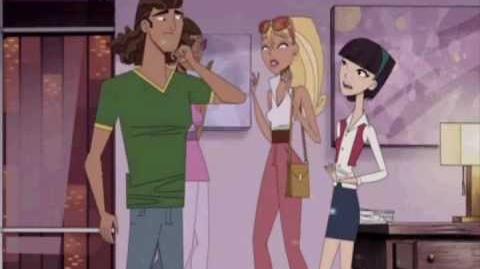 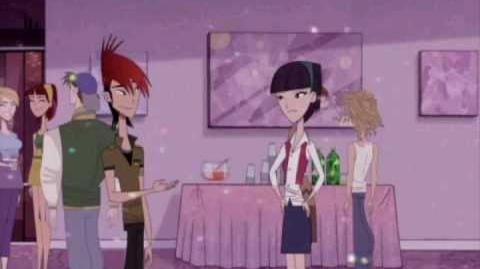 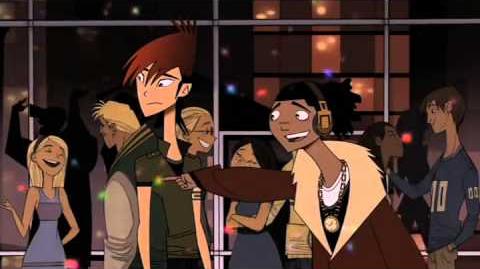 Can you see that? "Everything is according to plan."

Add a photo to this gallery
Retrieved from "https://detentionaire.fandom.com/wiki/Friday_Night_Bites?oldid=39445"
Community content is available under CC-BY-SA unless otherwise noted.