Start a Wiki
Giuseppe Stern, more commonly referred to by his nickname Emo Joe, is the leader of the Emo Clique. Unlike most students, Giuseppe Stern had a huge dislike of Lee Ping by the end of the first episode, because The Prank ruined his clothes. He went so far as to threaten to sue Lee over his ruined clothes. Lee also started a food fight that once again ruined Guiseppe's clothes. This food fight proved to be the event that caused him to form the Down with Lee Club.

Giuseppe works at a store at the mall which carries the same red backpacks as Lee's own (as seen in "The Hair Incident"). It is known that his is the only store that sells them in town.

He is also shown working at a taco stand in Knock Knock. 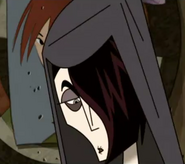 With one finger up,

Retrieved from "https://detentionaire.fandom.com/wiki/Giuseppe_Stern?oldid=38196"
Community content is available under CC-BY-SA unless otherwise noted.