Blitzkrieg Bop'd
Irwin Dexter is the leader of the School's Mathletes and an old rival of Lee. His E-mail account is IPFreely@Anigmahigh.

Prior to series start

Irwin is part of the Mathletes who are dedicated to solving the Pythagorean theorem and winning a 1-million-dollar prize. He was best friends with Lee Ping when he was with the Mathletes, but severed the friendship when Lee left the group.

Later on Irwin attempted to ruin Lee's new found reputation by photo-shopping a picture of himself picking his nose with one of Lee, therefore making it seem like a picture of Lee picking his nose. Irwin then sent the picture to everyone in the school. Though Lee was trying to get into Irwin's computer it was because he believed that Irwin was Radcircles@ANigmahigh, instead of trying to find proof that he was responsible for the email or information about the theorem as he had believed.

To this end he and the others captured Holger Holgaart while he was snooping around and tried to get him to confess to Lee Ping's actions via tickle torture and threatening cutting off all his hair. Naturally Lee tried to save him and succeeded by defeating Irwin in a dance off.

Irwin was also seen trying to get into Brandy's Party, going so far as to claim he and the Mathletes are friends with Lee.

He was later successful due to security being preoccupied with Holger. Since then Irwin has been the victim of several unfortunate events such as being infected by the flu and hit by dodge-balls, but most notably was accidentally framed for a prank Lee pulled thus prompting him, Robin Raven, Ed McFeeney, and Giuseppe Stern to form the Down with Lee Club.

Irwin and the Club were contacted by Lynch (Under the alias of Radcircles) who promised them revenge on Lee via his leadership. While Camillio accidentally distracted Lee Irwin stole Principal General Barrage's leg and planted it in Lee's locker. Lee, with help from Holger, was able to quietly get Barrage back his leg and afterwards confronted the group claiming they were just acting on petty grudges. Irwin also warned Lee that someone far worst was after him as well to which Lee responded Radcircles and Irwin said: "How did you know?"

Irwin carries his grudge against Lee throughout season 2 but unlike in Season 1 doesn't really act upon it much. Irwin served as campaign manager for Beth during the student body elections, of the three candidates he was the only who ran a clean campaign, though they still lost to Camillio Martinez. During Mastermind Irwin was shown to be a member of the Genius class, alongside Ruby Kwee, Nadene and others.

Following the Berzerk Cleaner incident Irwin and the genius club moved their headquarters into the library's "study hall" installed following the Library's renovations, as well as secretly salvaging the body of a Cleaner that Lee decapitated. During Tales from Decrypt Lee made contact with the genius club to aid him in cracking Radcircles phone, retrieving the head he knocked off in exchange.

Irwin claimed to have figured out the encryption with a glance but he would never reveal the secret because doing so would be helping Lee. To this end Holger challenged Irwin to a dance off with the secret behind the encryption on the line, which Holger won thus Irwin revealed that the secret was that the encryption was based on the Radial Circle therum thus easily cracking the phone somewhat proving he is smarter than Biffy who couldn't solve it.

After examining the head Irwin learned that whoever was controlling the Cleaners isn't now based on some out of place circuitry he found. Irwin also participated in the Dance theme picking competition alongside fellow Mathletes Wayne and Beth going with a futuristic gladiator theme, failing miserably due in large part to the entire student body being brainwashed into picking the "Save the Rain Forest theme".

Irwin is ambitious and somewhat arrogant, the latter quality making him a typical sore loser unable to accept defeat. To hold his leadership in the Mathletes clique he has committed various acts like humiliating his opponents or even cheating openly. He treats others, along with his clique colleges, with frequent irritation and disdain.[1]

Irwin is prone to holding a grudge, wanting revenge on Lee Ping for "abandoning" the Mathletes. Irwin has publicly professed to hating Lee Ping, but in reality still misses his friendship. Despite his vengefulness, he is still able to make friendships outside his clique (co-forming a new one into the Down with Lee Club) and welcoming Cam into it, despite him being his replacement as Lee's best friend. He also is willing to admit that Radcircles is more of a threat to Lee Ping than the Down With Lee Club.

As the leader of the Mathletes, Irwin is the most math-savy of the group, the fact that the group itself is dedicated to math indicates he is probably the best math student in school, short of Lee Ping. Out of a room full of very intelligent students (including  genius Ruby Kwee who had skipped at least 2 grades) he was the only one who saw that the Radius Circle Theorem was the secret to hacking into Radcircles phone.

Despite having to cheat at a dancing game to defeat Lee Ping, Irwin was still shown to be an excellent dancer (albeit with poor fashion choice). This was again shown when he nearly defeated Holger at a dance off, Holger himself being a good dancer as well. Had Irwin not been distracted and Holger had not rehydrated himself he could have very well won. 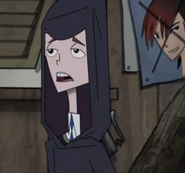 Irwin during a "Down with Lee Club" meeting.

Irwin with the Genius Club