Start a Wiki
General
Script
Jock and Roll High School is the second episode of Detentionaire. It premiered on September 13, 2011 in Canada as part of a preview for the show.

"You know what really sucks? Getting set up for the biggest prank in high school history on the very first day of tenth grade. Even though I had nothing to do with it Principal General Barrage gave me a full year of detention. So that very same day I snuck out and found a camera with a picture of someone messing with my bag during The Prank! If I can find a match for this hand I'll know who set me up! But that probably means sneaking out of detention one more time."

Lee Ping, clad in football gear is carrying a can of green paint and is being chased through the the pitch by Barrage. Barrage manages to corner Lee under the bleachers.

Lee, Camillio Martinez and Holger Holgaart arrive at A Nigma High. Holger apparently in a great rush as he didn't want to miss school. Camillio explains that they made plans to rule the school based on Lee's epic prankster status. Lee at first believes that everyone has already forgotten about the Prank but Holger and Camillio disagree, news of it has even reached Holger's cousin in Scandanavia.

The group has an unpleasant encounter with the Jocks inside the school, in which Lee and Holger are tackled by Steve the quarterback.

Tina Kwee and Chaz Monerainian make the morning announcements. The championship football team is holding tryouts after school. Tina also points out that a kleptomaniac seems to be on a rampage at the school, though the Cleaners are investigating, they don't seem to be making progress. Lee is working on his laptop trying to enhance the photo from the prank, Holger points out a scab and after few enhancements, Lee realizes that the person is wearing a "championship football ring" as well as having a scab on his mid knuckle.

Lee is discussing the Jocks with Holger and Camillio. Lee gets into another altercation with Biffy Goldstein after he accidentally burps on his food prompting Vice Principal Victoria to give him detention again. Brandy Silver forces Lee to sit with her. Luckily this works out in Lee's favor as it's also the table of the football team whom he has to check for scabs.

Unfortunately it seems that Steve believes that Lee is the School Klepto and believes he stole a prized family heirloom: a towel dubbed "Bub-bub". During lunch hour, Lee is able to eliminate three members of the football team before Barrage comes for him. Lunch hour counts as free time and free time is to be spent in detention.

Lee is upset that there's no jocks in any of his afternoon classes, hence he cannot check any of them for scabs. Holger is able to eliminate another Jock making it four down, twenty more to go. Lee convinces Holger and Camillio to try out for the football team to help him out.

Lee reports for detention. He asks Biffy why he freaked on him at the cafeteria to which he replies that he has a reputation to keep. He claims he needs people to take him seriously as he successfully completes his sweater for his pet cat but Lee points out that it only has three legs. Camillio and Holger report to the pitch. Barrage is overseeing tryouts personally and has turned the pitch into a millitary nightmare and the first task is to tackle him.

Those that fail are sucked into the Cleaners vaccums. Camillio and Holger are immediately eliminated however Camillio is able to convince some cheerleaders to hide him. After failing, Holger instead decides to tryout for the position of Waterboy, currently held by Ed McFeeney. Surprizingly Holger applies his extensive knowledge of cooking and spa to the position and thus does the job better then Ed.

Realizing that Holger and Camillio have been eliminated, Biffy convinces Lee to tryout himself, disguising himself using football equipment. Barrage continues the tryouts using a artillery cannon firing footballs to decide who can't catch. Camillio and Lee eliminate 3 more jocks as suspects, leaving 17 left to go. Barrage spots Lee, but luckily he believes him to simply be another student trying out for the team who has arrived late.

Barrage decides to cut Lee some slack if he can catch a football he throws. Using his extensive math abillities Lee catches the ball. Steve figures out that "#77" is Lee but after Lee insults his pride he instead promises retribution on the pitch, then he'll hand him over to Barrage. Using the Water Boy position Holger is able to eliminate most of the team. Tina is also on the field and is investigating the latest string of robberies.

Eventually Lee and the team narrow down the suspects to Steve. Barrage is impressed by Lee's abillities and thus offers one last test for Steve and Lee, a ball shot long and whoever catches it is the new team captain, who doesn't is his number two. During the final test, Lee spots Steve's hand and realizes he doesn't even have a ring. The distraction allows Steve to tackle Lee into Ed and Holger.

The tackle causes Holger to realize that Ed is wearing a football ring and has a scab on his hand. The tackle also reveals that Ed is the kleptomaniac, wiith some of the items he stole being in his trolly. Steve finds that Ed stole his ring and his Bub-bub, Ed admits to the thefts but he claims that he only stole a can of radioactive green paint from Lee's backpack.

While the School Klepto has been revealed Barrage is more concerned that his new starring backup, Lee aka number 77, is getting away. Picking up where the preview left off, Barrage has Lee cornered but the latter is saved by a greatful Steve using Barrage's artillery cannon. Lee gets back to detention striped of football gear just in time to be dismissed by Barrage.

Once home. Lee adds the paint can to his growing stock of evidence. Holger has won the water boy job and is overly joyed at the prospect. But the day has left more questions then answers: what's the deal with the paint? Who set Lee up? And most importantly: when will his body stop hurting!?

During the Football tryouts Tina meets up with Steve. Thought the latter is still a bit overemotional over the lost of his prized Bub-bub. Tina notes that the Cleaners are booby trapping the football field and much like the missing Principal Wurst Barrage is filling in for a missing Coach Pummel and fears that like Wurst, Barrage arranged for his disappearance too. 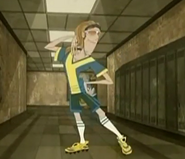 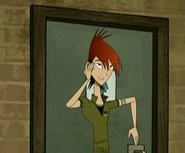 Cam and Lee
Add a photo to this gallery

Retrieved from "https://detentionaire.fandom.com/wiki/Jock_and_Roll_High_School?oldid=38111"
Community content is available under CC-BY-SA unless otherwise noted.