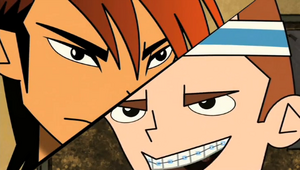 Lee and Irwin were best friends when Lee was a member of the Mathletes. For reasons unknown, their friendship ended and the two have become enemies.

Retrieved from "https://detentionaire.fandom.com/wiki/Lee_and_Irwin?oldid=37113"
Community content is available under CC-BY-SA unless otherwise noted.