This article features the relationship between Lee Ping and The Council.

Lee came into contact with the Council at the end of The Dance Part 2, as they took Veronica Victoria away. Cassandra McAdams next 'corrected things' by making everyone forget all that had occurred. When questioned by Lee, she told him that "everything had been taken care of" and that he (Lee) had done a great service to the Council that wouldn't go unnotice.

In Season 3, they have taken a more active role appearing in every episode as we see their true intentions being revealed. It is assumed that it was they who unexpelled Lee in Return of The Ping. Lee feels they are up to something and eventually realizes they are trying to open the Pyramid and that they have a second key, similar to one he has. Through the bugs Cassandra McAdams places in all the students' homes, she manages to find out he has the other key, and sends 'The Serpent' to retrieve it. Lee manages to place the bug on his motorcycle and traces him back to The Hydra (Casino). In Fight or Flight, Cassandra threatens his family as Lee refuses to give up all other routes to the tunnels, with him in the end giving up the hole The Outcasts had dug out. In the Season 3 Finale, Pyramid Scheme, Lee realizes that the Solar Eclipse is when the Pyramid will open, and along Finnwich and Lynch manages to stop the Council Member from escaping with the Keys, opening the Pyramid with Finnwich in the end. Finnwich seems to know more about the Pyramid than the Council does.

Lee and Cassandra in the Dance

Cassandra asking Lee for his routes of the tunnels

You really shouldn't have lied to me

The Serpent outside the Ping residence

Lee and the Unamed Male 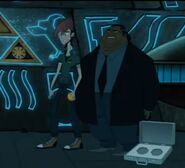 Lee and the Unamed Male by the Pyramid
Add a photo to this gallery
Retrieved from "https://detentionaire.fandom.com/wiki/Lee_and_The_Council?oldid=36420"
Community content is available under CC-BY-SA unless otherwise noted.