Terry McGurrin
Lou Black is one of the Outcasts and a former friend of Lee Ping. He, along with Deuce and Jenny, are the people who beta-tested the Prank Song's brainwashing powers. He first appeared in Outcast Times At A Nigma High. He was cursed into sucking his thumb.

Lou Black was the first suspect that Holger interrogated in The Outcasts Strike Back!, accusing him of stealing Lee's bag and the Key.

Lou along with Deuce and Jenny stole Lee's bag to get the key Lee has in order to unlock the secret underground tunnels under the school and get a Tazel Wurm whisker to, they believe "cure their curses", because the first time they got the whiskers they accidentally burned it after Deuce tried to eat it.

His friends Jenny and Deuce.

Lou chats with his friends about getting uncursed.

Lou was in the paper. 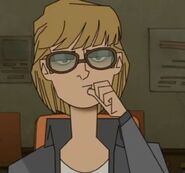 Add a photo to this gallery
Retrieved from "https://detentionaire.fandom.com/wiki/Lou_Black?oldid=38071"
Community content is available under CC-BY-SA unless otherwise noted.