Start a Wiki
General
Script
Pyramid Scheme is the thirteenth episode of Season 3 and the 40th episode overall. As a solar eclipse occurs, Lee races against the Council and Finnwich to open the Pyramid.

"Hi, I'm the Detentionaire and currently I've got a parent's council who's done everything, including threaten my family, all to get in some ancient pyramid under my school. Here are the members of the no good council in question: Kimmie's mom, some huge strung out scientist guy, a woman who dresses in black who's in a coma for I guess opening the pyramid the wrong way, some guy Biffy's sure isn't human and some smelly casino owning ninja dude. But the Outcasts found a book all about the pyramid and Jenny and Tina have been trying to decode it and get this, they found out that the book use to belong to Finnwich. When we made contact with him, we found out he was working with Lynch and the time was near. Then he disappeared. I know something big is about to take place but what?"

"Ok so my presidential status is on mucho shaky ground hombres. Someone is blackmailing me to do majorly embarrassing things all because I bought a book report from Grayson. I found out that Cyrus is being blackmailed too, and then a bunch of others, but then thanks to Brandy's mucho foxy brain we all figured out that we had something in common: everyone being blackmailed were in the same grade 3 class yo! So someone in that class, and not in our club, could be the blackmailer! Someone is going down!"

The Council has resorted to using Cleaners to try out combos to open The Pyramid at random, failing miserably thus far. They fear they will have to call in "the experts" but the member attempting to crack the pyramid states all he needs is more time. Meanwhile Tina Kwee and Chaz Monerainian announce that the eclipse is today, while Tina claims that it's pretty common and occurs every 112 years, Chaz claims that it's a sign of the apocalypse.

Jenny Jerkins is able to sneak Lee out of class by pretending she has a note from the principal. Professor Penniert has Steve bring out a telescope to record the eclipse. Meanwhile,  Camillio Martinez and Cyrus have already eliminated Suzie Elliott from the suspect list since she's been on a week long 'Save the Whales' campaign and Brandy is able to eliminate LaGreenor Jonesones from the list, too.

While Brandy goes to pick off another suspect Chaz interrogates Camillio about what he plans to do with the aliens, Chaz's predictions about a invasion soon comes true when an apparent mother ship comes in and destroys all the school's defenses.

Jenny Jerkins and Lee arrive for detention, Jenny having gotten there early so that she could try and wake Niles Peg, weird thing is every time she turns away from him, he moves closer and closer to the back wall. Barrage meanwhile is watching old security footage in his office and realizes someone has been controlling him. Resorting to extreme measures, he decides to open himself up and rip the chip out himself, causing him to fall unconscious.

Meanwhile, Jenny and Holger are accidentally locked in the detention room and Tina calls Lee with the truth behind the so called alien invasion, that Finnwich is behind it. Biffy Goldstein spots Finnwich's Steam-Mats running in the halls and opts to meet up with Lee to figure out what they're doing, unfortunately they're cut off in a Steam Mat- Cleaner war and thus Biffy believes they're meeting on the roof.

Lynch Webber reveals he is coordinating the entire invasion through one of the Cleaners. Luckily Finnwich cuts off Lynch's antics and reveals that the Pyramid can only be opened during the Eclipse, hence why they're striking now. Unfortunately Finnwich attempts to cut Lee off stating that this business is best left to the adults. Thanks to Tina however, Lee is able to sneak into the tunnels anyway.

Finnwich, Lynch, and a group of Steam Mats lower themselves from their blimp onto the school, arguing about whether or not they should have crystallized Lee. Biffy is lead to believe that they have captured Lee and are holding him in the blimp, thus he and Mrs. Rumplekittykat use the platform Finnwich came down on to go up to the blimp. Brandy meanwhile is attempting to question Irwin Dexter about the blackmail.

Irwin makes it clear that he wouldn't rely on Blackmail to deal with his enemies. Brandy eliminates Irwin and Branch from the list leaving Brad as the only target. Camillio decides to deal with Brad personally, roping Chaz into his schemes.

Jenny and Holger have resorted to beating on the door and wall trying to get someone on the other side to free them. Meanwhile the Steam-Mats infiltrate the Pyramid room and lay seige upon it. Barrage begins to awaken but his programming block is creating problems for him. On Finnwich's ship Biffy is able to save Lee from a Tazelwurm by taking control of the Steam-Mats, but is unfortunately cornered by a Steam Mat in the blimp.

With the eclipse fast approaching, Camillio is able to convince Brad that he's the only one who can save them by getting the access codes from a implant in his brain. To this end, Brad must answer some questions truthfully for them for their extraction device to work. Meanwhile Lee gets the suitcase away from the Council Member but he is soon cornered by the Reaper Mats that arrive to slaughter the Steam Mats.

The Council Member claims that they have the same goal of trying to figure out what's inside of the pyramid and corners Lee to try to open it.

Finnwich and his posse pass by Tina on their way through the underground passage in the library. Lee meanwhile is saved by a malfunctioning Barrage who ironically has come to kill him. On the Football Field, Brad confirms that he never blackmailed anyone, leaving for his trailer when the others say they have the codes. Lee is saved from Barrage by Finnwich who deactivates him, unfortunately he's double crossed by Lynch who attempts to tap the pyramid himself.

As a result, Lynch is also affected by the sleeping curse. Finnwich admits to Lee that he knew Lynch would try to double cross him, so he set Lynch's clocks ahead by a minute. Just a few seconds before the Eclipse, Finnwich  offers Lee the chance to share the Pyramid's gifts. Meanwhile, the blackmailed group learns they have to quit their respective cliques thanks to the blackmailer. Brandy however spots a fingerprint on one of the letters and thus gets an idea.

Biffy is still busy trying to deal with the Steam-Mat on the blimp. At that moment, the Eclipse finally begins, causing a beam of energy to erupt from a Tazelwurm Statue that makes the Blimp fall from the sky, making everyone run away. The Beam passes through the school destroying a portrait of Alexander Nigma and hitting Niles Peg directly; he seems to awake yelling "Manifestum!". Holger gets scared and runs straight into the beam, falling down.

Meanwhile, The Beam has reached below and straight into the Pyramid, energizing it. According to Finnwich "It's Time" as he and Lee each take a Key and turned them at the same time, here the episode is left at "To Be Continued."

Lee puling the suitcase out of Cassandra's brother's hands

The council without the other woman member

The woman member in coma

Cassandra's brother is mad at her

Lee and Jenny are trying to wake up Niles Peg

Barrage looking for his microchip.

Barrage is pulling his microchip out

Tina is frozen in crystal again

Lynch and Finnwich, Lynch got a new wig

The eclipse is almost here 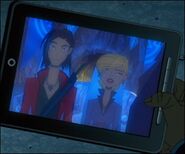 Barrage is in blue mode

Lynch being blasted by the pyramid

The beam is destroying the trophies

The beam is traveling in the hallway

The beam is traveling in the hallway still

The beam is burning the picture of Alexander Nigma

The beam goes in the hole of A N

Holger runs into the beam and falls asleep

The beam hits the door to the underground tunnels

The beam is traveling through the abandoned subway

The beam hits one of the steam-bots

The beam hits the pyramid

Retrieved from "https://detentionaire.fandom.com/wiki/Pyramid_Scheme?oldid=37995"
Community content is available under CC-BY-SA unless otherwise noted.