This episode is not to be confused with the fictional movie of the same name.

Revenge of the Cycle Killers is the fifth episode of Season 4 and the 45th episode overall.

While Lee and Biffy investigate a cloning conspiracy, a grounded Camillio watches a horror movie with his little sister that starts to become real.

"Hi, I am the Serpent. That's right the mysterious casino owner with a pet snake named Priscilla. You've heard of me right? I got my name when I passed my very first test. That was back when I came up with the deadly move called, The Serpent Strike. Trust me, you don't ever want it coming your way. I've heard Lee Ping calls me 'Stink Ninja', funny fellow. Want to know where the smell comes from? Can you keep a secret? It's my ancient medallion, worn by the greatest warriors. Handed down for thousands of years. That's a lot of blood, sweat and death my friend. I suppose now you want to know more. Aside from what I'm doing at the casino and for Cassandra, I'm on my own mission. And I now have all my facts. But how will I... use them."

Lee Ping and Biffy Goldstein are looking through some old teachers files and notes that they all live at Brandy Silver's condo when Lee brings out the one about his mother. Then the The Red Tazelwurm comes in and growls at them.

Professor Penniert is giving a lecture on his personal hero Ben Franklin when class lets out. Lee notes that Ben and Penniert look exactly the same Biffy suggesting that Penniert is a clone. Lee remembers that Camillio Martinez suggested that was the reason why the Serpent took Lee's hair was so that he could clone him. Doing a little research Lee learns that MWF clones sheep for food and thus they could easily clone a person as well.

Camillio is home watching his sister for his mother as part of his grounding. Camillio is trying to come up with a reason why Grayson has it in for him. Camillio calls Holger Holgaart and asks him to help Babysit to which Holger is already preparing. Angelina takes Camillio's sandwich and gives it back him with spit in it causing Camillio to have a flashback of someone being forced to eat a insect sandwich.

Meanwhile Tina Kwee and Jenny Jerkins are discussing the appearance of Jenny's mother in the brainwashing group's photo. According Jenny it's not her mother but her long lost twin sister who was a scientist. Tina points out that it's a little suspicious but Jenny's more immediate concern is her new boyfriend whom just walked through the front door of the cafe.

Jenny gets Tina to hide in the bathroom while she drives off with the Serpent on his bike. Meanwhile back at the School for detention today Lee and Biffy have to dispose of all the lice infected furniture in a Bonfire outside, having to take the long way around as "fire exits are made for fire emergencies." While disposing of the Furniture Lee notes that Mr. Langhorne looks like Mark Twain and could be another clone.

In the meantime they plan to take advantage of Barrage's teacher's meeting to go check his files, Lee roping Steve and the Jocks into disposing of the furniture for them. Meanwhile Camillio has once again failed to make contact with Grayson, instead of one of the kids shows she normally watches Angelina suggests that they watch a horror movie called "Revenge of the Cycle Killers."

Meanwhile back at the school Lee and Biffy learn that Barrage and Principal Wurst are having another argument. Seeing as how they can't check the computer they decide to look up the paper files. On their way to the basement to check Lee spots Wurst entering the teacher's lounge which is suddenly filled with Green Apple Splat smoke causing Lee to fall unconscious.

Meanwhile the Serpent is taking Jenny on a ride through the rain and stops in the middle of the forest, they're separated when he goes to investigate some rustling bushes. Meanwhile Camillio and Angelina are in the middle of the movie when they hear someone knocking on the door and mistake him for the cycle killer. Biffy meanwhile has finally managed to awaken Lee and informs him that he fainted.

Both boys decide to bolt when Barrage follows Wurst. Back in the forest Jenny is hopelessly lost when she runs into the Serpent and mistakes him for someone else she runs off again. Back at the Martinez residence the knocking simply turns out to be Holger, but unfortunately the knocking starts again leading to the trio to hide behind Camillio's couch.

Meanwhile the pair have found the teacher's records and Lee notes that all of the teachers all share a date of birth, February 29th, including his mother and decides to check her file too. Picking up where the preview left off the Tazelwurm steals Mrs. Ping's file and takes it outside to the bonfire to burn. Meanwhile the Serpent has brought Jenny to her bike which he claims he found and repaired.

Back at the Martinez residence Camillio has decided that enough is enough: when the killer starts knocking on his window he has Holger open while he hits him with a tennis racket revealing the "Killer" to be Grayson. Once inside Grayson explains that he came over to apologize for his behavior in regards to the blackmailing he's been doing.

Grayson explains that he wanted revenge on those who use to tease him in the third grade having suffered the same humiliations that he put the others through at their own hands. Having felt terrible over the whole thing he wants to know if Camillio is willing to forgive him and offers to set things strait. Meanwhile the Serpent breaks up with Jenny when he rather rudely splashes water in her face.

Once back home after a long day Lee and Tina are discussing Jenny's new boyfriend whom Tina has a bad feeling about, trying to change topics Tina asks Lee if he has any new leads on the guy who stole his hair. According Lee he's turned up evidence of a cloning conspiracy, but Tina reassures him by reminding him that he's one in a million, not one of a million. Saying good night Tina is left concerned about Lee. 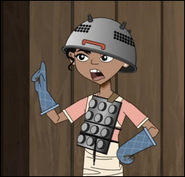 Add a photo to this gallery
Retrieved from "https://detentionaire.fandom.com/wiki/Revenge_of_the_Cycle_Killers?oldid=37925"
Community content is available under CC-BY-SA unless otherwise noted.