At first Robin doesn't remember why she hates Lee but is reminded by Irwin that it's because he got her into detention. Afterwards she seems to go all out on her dislike for Lee. Robin was the one who invited Camillio into the club, and took a video of Cam and Lee fighting.

Robin being taken away by the Cleaners. 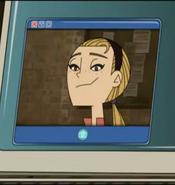 Robin speaking to the other "Down with Lee Club" members via video chat.
Add a photo to this gallery
Retrieved from "https://detentionaire.fandom.com/wiki/Robin_Raven?oldid=38472"
Community content is available under CC-BY-SA unless otherwise noted.