Ruby Kwee is the 11 year old sister of Tina Kwee. Despite her young age Ruby has been skipped ahead several grades and is currently in 10th grade, and was recommended to university by her favourite teacher, Mr. Rousseau. She previously claimed to be behind the prank, so she wouldn't have to leave high school to go to university. She first appeared in Mastermind and appeared again in Tales from Decrypt. Along with a few other geniuses, including the "Tech Nerd", Nadene and Irwin Dexter, formed the "Genius Club": an organisation dedicated to making sure the Cleaners do not go haywire again.

She appears in the background in Big Chicken. 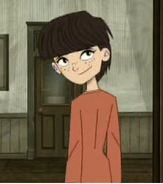 Ruby, getting escorted to detention by Veronica Victoria.

Ruby forged schematics for the prank

Biffy loses to Ruby again
Add a photo to this gallery
Retrieved from "https://detentionaire.fandom.com/wiki/Ruby_Kwee?oldid=38241"
Community content is available under CC-BY-SA unless otherwise noted.