Start a Wiki
General
Script
Skate or Die is the third episode of Detentionaire, it originally aired on September 14, 2011.

"You know what almost sucks worst then getting detention for a whole year? Getting crushed on the football field trying to find out who set me up for it. It was a dead end. Ed the water boy didn't set me up but he was the school thief, he stole a can of paint from my bag during the Prank, which wasn't mine. So someone planted it in my bag to make it look like I did it and now I have to sneak out of detention again to find out who it was."

Biffy Goldstein calls Lee Ping to tell him that Principal General Barrage is off the map but he got the message. Lee tells Holger Holgaart and the others to forget the prank and Barrage is on his way.

During first period Holger is tensely taking notes using a brand new Pen, which he destroys. Tina Kwee reminds the student body that they still have one day left to vote for the student of the week. Camillio Martinez naturally assumes that Lee will be the first student of the week for the new year but he is more concerned with getting to detention before Barrage hunts him down.

The Skaters meet up with Lee and their leader Zed Point Conasty requests another prank email from Lee. Lee, naturally confused, tries to catch up with them to ask them what they're talking about, however he is intercepted by Brandy Silver. The leader of the Glamazon's, Kimmie McAdams wants to be declared student of the week this and every other week thus Brandy is forcing Lee to help. Lee however doesn't have time due to detention and instead Camillio volunteers.

Lee is able to meet up with Zed and the Skater's again in the cafeteria, at which point they claim that Lee sent them a email telling them to set up the prank. Before Lee is able to learn anymore information Barrage arrives and drags Lee off to detention. Lee sneaks out again and calls Holger to keep a eye on Barrage, telling him to phone him if Barrage heads to the parking lot or the detention room.

Lee follows the Skaters outside to question them about their involvement in The Prank. During which they explain they only did the paint part, the rest was apparently all Lee. During the conversation on wheels Lee crashes into his mother's car breaking the mirror on it. Zed requests another prank email, Lee, preoccupied with the mirror, sarcastically tells him to rig the student of the week to come up as Barrage and dump the rest of the paint on him.

Holger calls Lee to tell him Barrage is going to the parking lot. Holger is able to distract Barrage by leaving his cell phone for him to find, which because of a war games ap makes Barrage plenty preoccupied. Brandy finds Lee outside and in order to keep her from telling Barrage about him Lee kisses her, which visibly stuns her. Biffy is also outside attending to his cat, Barrage catches him and believes he broke the mirror and thus gives him detention.

Lee meets up with Camillio in the halls. During the conversation Camillio lets it slip that Lee has kissed Brandy, which is overheard by Tina. Zed tells Lee that they're going through with the second prank and are going to cover the news team and Barrage with the paint. Lee tries to divert their wrath onto Barrage's car so to spare Tina, but he is overheard by Barrage who drags Lee off to detention.

Biffy sumarizes the upcoming prank as: Lee's crush is going to be painted green, Barrage is going to give detention for life, and the prank happy Skaters are going to be turned loose on the school. Thus Lee has to stop them before the entire situation spirals out of control. Lee orders Biffy to track Barrage using Holger's cell phone.

Lee meets with the Skaters and Holger outside in the parking lot. Brandy is still stunned by Lee's kiss, she explains to Camillio that it wasn't like she had expected since it was her first.

Lee questions the Skaters on the new paint supplies, they state that Lee left it there for them along with a new email detailing the new prank. Lee observes that the email, Radcircles@ANigmahigh, is not his and is most likely the email of whoever set him up. Holger plus two skaters go to rig the ballot while Zed, Lee and another Skater go to set up the paint, Lee taging along to try and stop them.

Lee is able to get the schematics for both pranks from Zed's cell phone, realizing that they only have the schematics for the paint. Lee decides the whole thing has gotten out of hand and orders Biffy to text Barrage telling him to come to the news room and stop the whole mess. Angry that Holger's phone destracted him from his duties Barrage destroys it preventing Biffy from tracking him.

Picking up where the preview left off, Barrage has Lee cornered behind a table, Holger is able to dump the paint on Barrage temporarily blinding him and allowing everyone to make their escape.

Lee is being chased by the blinded Barrage but he is able to narrowly get back to detention just in time for Barrage to dismiss them.

Lee is in his room trying to figure out who Radcircles@ANigmahigh is. Holger calls and informs Lee that he just counted the ballots he stole and the winner was Lee. Camillio calls Lee and tells him about Brandy, Lee requests that Holger and Camillio keep quite about what they learned. Once alone Lee swears that he will find Radcircles, and figure out why he set him up.

Tina and Chaz Monerainian announce the first student of the week, Principal Barrage. Tina is naturally confused as Barrage is not a student. She takes the opportunity to ask him about Principal Wurst and Coach Pummel to which he states that they're on vacation. In fact he just got a post card from them that morning, Barrage cuts the interview short telling Tina to meet him in his office. After Chaz leaves Tina rewinds the video feed and learns that the Postcard came from a place called Coral Grove, and is one step closer to figuring out what Barrage is up to. 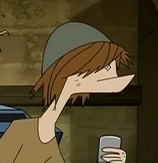 Retrieved from "https://detentionaire.fandom.com/wiki/Skate_or_Die?oldid=38199"
Community content is available under CC-BY-SA unless otherwise noted.