Stepak is a student at A. Nigma High and the camera man for the school's News Team. He is usually seen with Tina and Chaz whenever they're filming news for the school's website or announcements or obtaining scoops. He is shown following the two anchor people as they try to uncover various scoops and mysteries throughout the school.

He has yet to play a big role and to be formally introduced. 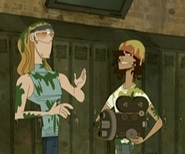 Stepak, in the aftermath of the Prank
Add a photo to this gallery

Retrieved from "https://detentionaire.fandom.com/wiki/Stepak?oldid=38012"
Community content is available under CC-BY-SA unless otherwise noted.