Sue Ping (referred to as Mrs. Ping) is the mother of Lee Ping and the wife of Alfred Ping. On top of being Lee's overbearing and strict mom she is a math teacher at A Nigma High. She is a demanding teacher and is very strict with her students, especially her son, whom she grounds for a full year after the Prank is pulled.

Sue and Alfred Ping met in Korea where they had their first son, Li. Two pictures of them where taken at the time, one of which Lee finds in "28 Sneezes Later", assuming the infant on the picture was him.

After their firstborn was kidnapped, the Pings fled from the country, hiding and hoping for a peaceful life. They settled in Canada where they eventually had Lee, the second son, and hid the truth of their involvement with MWF from him.

It is unknown at which point Sue was cloned and taken to the Coral Grove. It is also uncertain for just how long the clonned Sue Ping has been replacing the original one. The revelation of Sue Ping being clonned occured in "Game of Clones" when Lee and Biffy found Sue's body sealed in a 'fridge' in the clonning lab underneath school.

The original Sue Ping had been trapped in the Coral Grove where Lee and his friends found and rescued her in "Date With Destiny".

Mrs. Ping expects nothing less than perfection from people and berates them for anything less. She seems strict and intense, especially to her own son Lee, and is a critical teacher to the students. Despite the harshness, Sue is a loving and caring mother who wants nothing less than the best for her family. Sue is straight forward and doesn't like wobbling, standing as a leader among other A.Nigma high teachers and speaking for most of them as seen in her conversation with clonned Art Wurst in "Band Of Heroes" and "From Bad To Wurst".

Though it appears she doesn't work in the lab below the School she might be involved, to some degree, in the conspiracy that surrounds her son.

Mrs. Ping is an exemplary housewife and a great cook as well as an intelligent woman who comprehends math exceptionally well. She has surprisingly great marksmanship skills as shown in "Clogspiracy", where she had to battle Mr Blompkins on crystal guns.

She has short black-brown hair and is usually seen wearing a red dress and crimson high heels. In the picture with her, Mr. Ping and an infant Li, She wore a red dress with black pants and was shown to have longer hair, having it go down to her back with the rest in a short bun with kansanshi poking from her bun.

Lee Ping - is Mrs. Ping's secondborn son. She raises him with an iron fist and demands perfection of him, what results in her being unamused with Lee's breaking the rules, pranks or getting a C[1]. Yet as every mother she has a soft side to him, which results with sporadic showing of affection[2] and rewarding Lee whenever he proves worthy her trust[3].

Dr. Alfred Ping - is Sue's husband. Mr. Alfred believes that his wife "hates him [doing dangerous things]", though it was obvious he was lying when he said this.[2]. Her relationship with Mr Ping improves with time. She appears more affectionate around her husband when he comes back from a mysterious business trip. Later, she even gives Lee a free Saturday so she and her husband both can spend time alone together.

Li "The Serpent" Ping - is Mrs. Ping's firstborn son and Lee Ping's older brother. Apparently, she and Alfred never told Lee about him being kidnapped as they also hid the fact that they were involved with MWF. Clone Sue met the Serpent in the hair salon in "Fight or Flight", but she did not recognize him due to probably being clonned some time after Lee was born and Li kidnapped.

Mrs. Ping is Mad for Yelling at Lee for having been expelled

Sue Ping VS Phil Blompkins In THE ULTIMATE CLOG WARS!!! 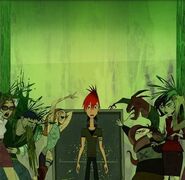 The real Sue Ping reuniting with Lee in Date With Destiny

Retrieved from "https://detentionaire.fandom.com/wiki/Sue_Ping?oldid=39295"
Community content is available under CC-BY-SA unless otherwise noted.