The Cam-didate is the second episode of season two and the sixteenth episode overall.

"Ever since I was framed for pulling the biggest prank ever, I've spent every waking second trying to figure out who framed me. Then Radcircles, as he likes to call himself, turns out to be my best friend: Cam. I really wish it weren't true, but here's what I know. Clue one: Cam destroyed the prank footage that showed him switching my bag. Clue two: Trevor saw Cam acting all weird in the rafters during the prank... well, weirder than usual. Clue three: Cam's shoe print matched the potato flakes in the rafters which proved he was up there during the prank. So now that I know Cam is radcircles, it's time to bust him and clear my name. But how exactly?"

With a cheering crowd present Lee and Camillio are having a fight in the rafters of the auditorium. Lee telling "Radcircles" that it's time they finish this.

Biffy Goldstein and Kimmie McAdams are walking their respective pets Mrs. Rumplekittykat and Mr. Margolious to school. Kimmie stating that it's felt like a million years since they walked to school together, Biffy clarifying that's it's only been three years. Kimmie comments on the leash Biffy is using to which Biffy claims that he made it.

Kimmie decides to make Biffy "eat her dust" and kicks some into his face before running off. Lee arrives on seen, taking the "Ninja route" so as to avoid Camillio. Biffy however reminds Lee he doesn't want people to know that he has friends and thus Lee gives Biffy a head start. Arriving at the school Lee discovers that Holger Holgaart has stuffed pancake batter into his ears to avoid listening to Lee talk about Camillio.

Lee decides to drop the whole Camillio/Radcircles issue for now. Kimmie also notes that Brad Von Chillstein is absent, apparently home sick with the cold. Tina Kwee and the returned Chaz Monerainian announce over the intercom that a mandatory assembly is being held in the auditorium.

Principal General Barrage announces at the assembly that this year election week for the student body president will be election day, today. Irwin Dexter nominates his fellow Mathlete Beth, Kimmie and Dick Andrews realize they can't nominate Brad because he isn't there and instead they decide to instead nominate Camillio whom gladly accepts.

Trying to keep things even between Lee and Camillio Holger also nominates Lee. While at first Lee has no intention to run Barrage forces the issue upon learning that Lee doesn't want to run. Tina catches up with Lee outside the auditorium, informing him that she just looked up the student charter of rights and learned that if Lee wins the election his year long detention will become null and void.

After Tina and Holger leaves Lee receives a text from Radcircles telling him that he will not win the election. Meanwhile Dick, Kimmie and Camillio are planning their election plan. Whereas Camillio wants to run a clean campaign showcasing how cool he is Dick and Kimmie insist that a dirty campaign is the way to go and wants all the available dirt on Lee that Camillio can come up with.

Brandy Silver meets up with Holger in the halls and requests his opinion on which tie she should use for Camillio's outfit to which Holger suggests the mice pattern. Holger soon has a panic attack realising that he's helped Camillio without helping Lee Holger goes to find Lee to help him and make things even between Lee and Camillio again.

Tina and Chaz announce the election schedule: At 12Noon the meet and greet in the cafeteria, at 4:15PM is the debates and at 4:30PM is the voting. Radcircles calls in warning Lee of a commercial. Right on cue the smear commercial assembled by Camillio's party showcasing Lee as a prankster whom if elected will turn the school upside down airs, earning Lee stares from the rest of the student body.

Kimmie runs into Lee in the hall and fakes getting squirted with ink by him to further his prankster reputation. Barrage finds Lee and informs him that he has detention, dispite the fact that he's suppose to be in the cafeteria for the meet and greet. Lee goes to the detention room as instructed and meets up with Biffy, upon learning that Kimmie is Camillio's campaign manager he decides to become Lee's.

Holger arrives on scene desperate to make Camillio and Lee even again, which gives Biffy an ideal. In the cafeteria Camillio seems to be in the lead, dispite the Mathletes best efforts including handing out protractors in the shape of Beth's mouth (which Zed Point Conasty mistakes for a boomerang and feeds to the Tatzelwurm). Holger however arrives on scene with a laptop uplink to the detention room.

In addition to a rousing campaign speech by Lee Biffy has taken a page out of Kimmie's book and assembled a smear campaign commercial against Camillio, showcasing his heinessly bad foot odor, which grosses out the student body.

Camillio, Kimmie and Dick attempt damage control after lunch by appealing to the personal tastes of the student body. Unfortunately a second smear commercial from Biffy pretty much ruins Camillio's gangster image. Camillio confronts Lee pointing out that the Sleep over picture was a low blow, Lee in turn points out that Camillio was the one who made the "Lee the Prankster" posters.

Kimmie figures out that Biffy is Lee's new campaign manager based on the "evil genius finger tap" thing he's doing. Kimmie in turn raises the stakes by pretending to have turned Biffy down on a date thus dealing a blow to his reputation. After every one else leaves Lee receives a text from Radcircles about a joke on one of Lee's cut outs. Spotting Camillio Lee is lead to the conclusion that Camillio sent the joke to Lee.

Holger arrives on scene and hysterical over Camillio and Lee's arguing states that he will only remain friends with whom ever wins the election.

Tina announces the latest polls, with Lee in the lead with one point. Kimmie and Dick are concerned if Camillio doesn't win then they'll lose control of the school. The two of them meet up with Camillio in the halls and inform him that should he lose the election his new incrowd status will go up in smoke. Desperate to win Camillio takes a accidental suggestion from Holger to reveal Lee's crush on Tina thus embarrasing him.

Lee and Biffy plan their next move in the detention room when Holger arrives and blurts out "Cam-Hypnotised-Butterscotch-Monkey-Maybe." Lee clarifies and explains that Camillio has been hypnotised to act like a monkey whenever someone says Butterscotch. Biffy believes that it's the perfect thing to use against Camillio Lee however believes that it's too dangerous, Camillio has no self control when in "Monkey mode" and can hurt someone.

At the debates Beth and Lee have already arrived at the debates, Camillio arrives with a spectacular entrance one minuet short of having the debate start with out him, prompting Barrage to mention that next year, election day is going to be election hour. Camillio announces Lee's crush on Tina which embarrases the both of them. Taking the gloves off Lee says Butterscotch and throws Camillio into Monkey Mode.

Camillio quickly climbs the rafters and is on the verge of falling to his death. Lee at first tries the Queen of Hearts trigger phrase but the cheering crowd deafens Lee's attempts so instead he cuts a sand bag and uses it to propel himself to the rafters. Picking up where the preview left off Camillio grabs a empty sack and dumps it over the crowd.

Lee realizes that someone used the Butterscotch trigger phrase to force Camillio to dump the potato flakes over the crowd during The Prank. Lee then snaps Camillio out of Monkey Mode and pulls him to safety, explaining everything that happened him thus reconciling and repairing their friendship and lowers themselves to safety.

The voting goes underway with Camillio winning in landslide, apparently thanks to the monkey routine. Kimmie meets with Biffy to rub in her superiority prompting Biffy to fake rejecting a offer from Kimmie to kiss her thus striking a blow to her reputation.

Once home Lee meets with Camillio online, once again didicated to Lee's efforts to catch Radcircles intending to get payback for hypnotising him. Radcircles cuts in once again claiming to be Camillio. Luckily Lee knows better this time, ordering Radcircles to show his face prompting Radcircles to cut out with a "Too late" crack.

Hats for the election, chosen by Brandy

Lee's secret, revealed for all to see

In monkey mode, Cam grabs a sack of potato flakes..

... And dumps them on everyone 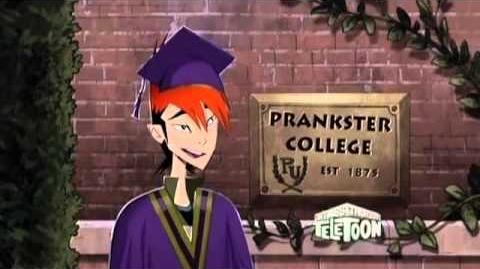 Detentionaire - Vote For Cam!
Prank Peanuts- Cam makes it seem like a practical joke from Lee.

Lee reveals Camillio with a small toy from a sleepover.