Start a Wiki
General
Script
The Down With Lee Club is the 12th episode of Detentionaire. It first aired March 29th, 2012.

"Apparently I pulled off the biggest prank in High School History and because of it I got a whole year of detention. Problem is: I didn't do it, but I did have to pull a few other pranks to clear my name, and I might have gotten a few people in trouble and made a few people mad, like Irwin, Emo Joe, Ed the water boy, and Robin; not my biggest fans. Worst yet, someone named Radcircles contacted me and admitted to everything, and now they're getting way to close for comfort. I don't like him. First he set me up, now he's texting taunts. Radcircles, whoever you are, I'm going to get you back."

Lee Ping is carrying Principal General Barrage's robotic leg through the halls, with Biffy Goldstein telling him to get rid of it before he's expelled or worst. Lee asks what could be worst and Barrage answers in the form of death threat. Lee is cornered by both Barrage and the Cleaners behind a corner.

Lee, Camillio Martinez, and Holger Holgaart take the bus to school, Holger taking the liberty of showing his lack there of juggling abilities. Once at school Mrs. Ping informs Lee that if he should ace his math test today then she will allow him the weekend off. Lee makes plans with Tina Kwee to go to the "Patsy for Hire" concert on Friday, and is unwillingly also forced to take Brandy Silver as well.

During the Math test Lee's pen is stolen and replaced with one filled with invisible ink, thus causing him to fail miserably. Because of this, Lee is forced to cancel the date with Tina, he also discovers the Down with Lee Club graffitied outside his classroom, showing how much the group hates him. Behind the school at Ed McFeeney's house the Club consisting of Ed, Irwin Dexter, Giuseppe Stern and Robin Raven are celebrating their victory against Lee.

The group is contacted by Radcircles, who has noticed their hatred of Lee but points out their work is second rate. RadCircles tells the group that he has a plan that will get Lee expelled, if Lee is blamed for one more prank then he will be expelled! When asked how he knows he simply states "I know everything it's scary sometimes."

Meanwhile in detention, Lee has met Biffy Goldstein who states that, based strickly on deduction, the Down with Lee Club meets at Ed's treehouse. Biffy sends in Mrs. Rumplekittykat with Lee to spy on the group, unfortunately not only don't they get any usable information but the group's pet crow exposes the spying cat, forcing Lee to vacate.

The group shouts to Barrage that Lee is out of detention, forcing him to rush back just in time for Barrage to check his alibi. During Gym class Lee devises a plan to infiltraite the Down with Lee Club. One of his friends and him will stage a fight that will make it look like they're turning against him, promising the four "Patsy for Hire" tickets he bought.

Camillio points out that it has to be him, as Ed will never allow Holger to join due to his water boy grudge. The fight goes as plan with the added benefit of boosting Camillio's social status.

The group (Down with Lee Club) is eager to admit Camillio but Radcircles is suspicious and states that they must stage a test of his loyalty.

Camillio with a cell phone on speaker wired to Lee infiltraites the group. The plan is to stage three pranks at once: first, they will use acid to burn 'Ping Rocks' into the football field, second the parking lot will flooded with foam thus drawing the faculty outside where they will see the football field, and third while the faculty is outside, sewage will be pumped into the teacher's lounge.

Lee has noted all three plans and will be ready for them.

Holger is out at the football field waiting to catch the group in the act, as is Camillio in the parking lot and Lee outside the Teachers lounge. The group are no shows and Biffy learns why, he managed to hack the security camera's and has learned that Irwin has planted something into Lee's locker and tells him to which Lee realises that wasn't part of the plan at all to which Biffy replies that he (Lee) has been duped by the Down with Lee Club. Out of the four of them, Holger is closest and gets there in time to remove Principal Barrage's leg before Barrage arrives.

Holger hides in a closet with the leg but accidentally breaks the knob off trapping himself inside. At first Camillio tries to go help Holger but he is intercepted by the Club, instead forcing Lee to go help Holger. Lee breaks Holger out of the locker and orders him to run while he deals with Barrage. Picking up where the preview left off, Lee is able to escape into a vent by ditching the leg thanks to a distraction from Holger.

After being dismissed from detention, Lee confronts the Down with Lee Club. At first he believes it's simply because of Irwin's math grudge but they explain that they were forced to take the fall for his pranks.  They also reveal that someone far worse is after him who has a taste for "Knock, Knock" emails. At home, Holger and Camillio call Lee from the concert, having taken Greta Von Hoffman and Brandy out respectively. 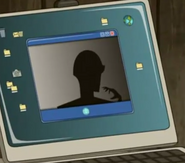 Retrieved from "https://detentionaire.fandom.com/wiki/The_Down_With_Lee_Club?oldid=38107"
Community content is available under CC-BY-SA unless otherwise noted.