Start a Wiki
General
Script
The Hair Incident is the 13th episode of Detentionaire. It premiered on April 5th on Teletoon.

"Ever been acused of doing something you didn't do? Yeah, welcome to my world. I got a year of detention for pulling off the biggest prank of highschool history when all the evidence pointed to me. Like when the knapsack Principal Barrage found filled with stuff that made me look guilty. But it wasn't my real bag, right before the prank, someone switched it. Someone I call Radcircles, the mastermind behind this whole crazy thing. Of course, it's not all bad, some people actually think I'm pretty cool! And some...not so much."

Lee is on the other side of town chasing after the bus to make it to detention in time. On top of that, Stinky arrives on his motorcycle, and approaches Lee.

Biffy Goldstein is running to school and accidently knocks over a student. Vice Principal Victoria witnesses this and sentences Biffy to a day of detention. In the classroom, Lee and Holger Holgaart are sitting next to each other when the anncouncements come on. Chaz Monerainian brings up the fact that his segment "Chaz's Corner" is only two days away.

Tina Kwee interrupts him with news about hair extentions being anything but harmless. This is only due to the fact that they had almost drowned Brad Von Chillstein, a student on the swim team, by getting his foot caught on a grate, who was rescued by Tina. In order to stop the use of "wig weapons", Tina reveals the culprits who use hair extentions, which happen to be all of the Glamazons, the resulting high pitch screams shattering Holger's collection of Snowglobe pens.

When class is over, Lee approaches Brandy Silver whom explains that she's had a hair dye accident recently that caused her hair to fall out. Brandy mentions how revenge is the only way to get over the incident, that as well as going on a shopping spree. Lee goes to his next class as Kimmie McAdams is spotted by VP Victoria carrying a dog, Mr. Margolious, in her purse. Victoria mentions that dogs are against the rules, and give her detention after school.

Back in the classroom Lee and Camillio Martinez are working on their chemistry project, which Camillio ends up blowing up in their faces. Lee attemps to approach Tina to tell her that Brandy and the Glamazons are out to get her. However, he is interrupted by Brad who thanks Tina and asks her out on a date to the mall after school to return the favor. Outside of class, Lee spots Brandy handing something to Brad.

Lee assumes that Brad is in on the revenge scheme with Brandy, at first he tries to ask Holger and Camillio to keep a eye on them but Holger has Waterboy practice afterschool and Camillio has to babysit his little devil of a sister Angelina Martinez again. Lee attempts to warn her, but instead accidentally insults her causing Tina to walk away angrily.

Lee tells Biffy how he is worried about Tina, and is planning to sneak out, yet again. Barrage comes in the detention room with Kimmie, so Lee's plans on sneaking out are now even more complicated then before. Barrage mentions how he has some "off campus business to attend to", and leaves the three in detention. Lee makes a deal with Biffy to distract Kimmie while he sneaks out to the mall in exchange for some exclusive Dudes of Darkness memorabilia from Cyrus Xavier

Lee is taking the bus to the mall and talking to Camillio whom is stuck baby sitting his Little sister. Lee spots Barrage driving in his car and his forced to duck out of sight to keep from getting caught.

Lee is looking for Tina and Brad, but instead runs into Brandy. He see's Brandy holding poison, and assumes it will be used to mess with Tina. He runs off before Brandy could spot him. He runs into a store that happens to be where Giuseppe Stern is working.

In the store Lee sees a red backpack that looks exactly like his own and like the one from the Prank. Joseph mentions that his store is the only one that sells them, so Lee asks him for the security tapes to figure out who bought the bag.

He assumes that whoever did is most likely the culprit who switched his bag during the Prank. Joeseph replies telling Lee that he doesn't even like him, reminding him he's a founding member of the Down with Lee Club so he will not help him.

Lee then calls Holger and asks him to get the security tapes. Lee gets a phone call from Radcircles who is watching him and knows he's at the mall. In detention, Biffy and Kimmy are playing with apps on his phone. It is revealed that the two used to know each other when they were younger until they broke up their friendship during the 7th grade for unknown reasons.

Back at the mall, Lee takes Tina aside and warns her yet again, about Brandy's plans. Tina claims that she doesn't need Lee to protect her, and doesn't want anything to ruin her first date. Lee gives up and walks away, only to see Barrage at the mall handing Radcircles a briefcase.

Holger arrives to Joeseph's store in a terrible disguise and tries to get the surveilance tapes, but fails. Lee calls Zed and the Skaters to help distract Joseph while Holger gets the tapes. On Tina's date, Brad mentions how he wants to remember the day via taking a picture. He gestures her to take a few steps back until she is right underneath Brandy, who is getting ready to dump to poison on her.

Lee saves Tina by swinging on a rope and pushes her out of the way. This causes Brad to be the one covered in poison, which is revealed to be bleach that ends up ruining his hair. He acuses Tina of planning it on purpose, and walks away. Tina, angered by the whole situation, yells at Lee for getting in the way of everything. Lee, realizing his mistake, understands that Brad must really like Tina and almost confesses his true feelings before he is reminded of his duty to head back to detention.

Where we left off in the preview, Stinky, a 15th Grader approches Lee and mentions how he is his inspiration, and he taught him to follow his dreams. Lee asks him for a ride on his motorcycle, and he gladly oblidges. Lee arrives at the school around the same time as Barrage does. He calls Biffy who has a distraction planned.

As Lee arrives close to the detention room, Biffy lets Mr. Margolious loose, causing Barrage and the Cleaners to chase after it. This gives Lee just enough time to sneak back into detention. Kimmie leaves the room gesturing Biffy to give her a call.

Later that evening in Lee's room, he is video chatting with Cam and Holger. He tells them how he blew it with Tina, and asks Holger if he found out who switched the bag. Holger replies with a no. In Holger's bedroom, he remains to watch the surveilance tapes closely and spots Camillio buying the backpack. 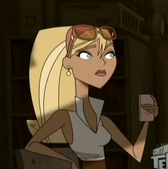 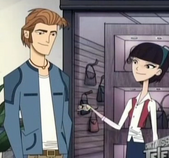 In your opinion, with who Barrage speak?

Add a photo to this gallery
Retrieved from "https://detentionaire.fandom.com/wiki/The_Hair_Incident?oldid=38024"
Community content is available under CC-BY-SA unless otherwise noted.