The Tazelwurm escapes the lab.

Protector and safeguard of all things sacred, school mascot

Blitzkrieg Bop'd
The Voranastazicio, more commonly known as The Red Tazelwurm, is a cryptozoological creature native to the surrounding area of A Nigma High, and acts as the school's mascot. The Tazelwurm goes by a number of different names, including The Taz and The Tazelwurm.

The Tazelwurm is a creature whose species dates back to prehistoric times and is believed to be the guardians of sacred places. The Red Tazelwurm in particular is a rare sub species whose job is not a protector of places, but also people.

At an unspecific time, a Red and Blue Tazelwurm were closing the Pyramid with both keys, which they then proceeded to hide.

The original Tazelwurm mascot of the school was found in the area near the school and made its mascot by Alexander Nigma. Apparently he and the Tazelwurm were very close. Just when the pyramid opened Nigma had the Tazelwurm seal the book, as a precaution. However once inside the pyramid, and Carl Brocher was awakened, Nigma realized his mistake and attempted to stop the newly awakened reptilian. When Nigma was knocked out the Tazelwurm rushed to aid Nigma, and succeeded in holding off his Eminence for a time, before rushing back out and seizing one of the keys to the pyramid. After this incident and Nigma's death, the Tazelwurm became uncontrollable, but still considered to be safe enough to be the school's mascot.

That Tazelwurm was also present during the final years of the original Dr. R. Wurst's life possibly aiding his old friend's student or comforting him during his final years. Maxwell Finnwich also alluded to the Tazelwurm aiding him, and Apparently the Tazelwurm has been a long standing thorn in Brocher's side, aiding his enemies and stopping his plans. It is also implied that the Tazelwurm is responsible for alerting Lee Ping's Grandfather to His eminence's true colours.

While it is known that Tazelwurms have long lifespans, it is unclear whether or not this Tazelwurm is the same one that Alexander Nigma tamed. The Tazelwurm lives at A Nigma High but freely roams around the school grounds and occasionally ventures out into the surrounding city. The Cleaners are seen frequently trying to catch and chain it, even sometimes being successful, although the Tazelwurm's incredible strength usually means that it is not held captive for long.

The Tazelwurm seems to prefer to maintain the façade of being a fearsome predator, occasionally attacking students to perpetuate the rumour. The Tazelwurm is known to use it's reputation as a fearsome monster to his advantage, scaring off any threat it may find.

During Lee's hallucination from a nasty case of the Flu he took the appearance of a sophisticated gentleman with a moustache and goatee and helped Lee through a secret facility under the school. He's also shown to have a extreme dislike of the Prank song.

While inside the laboratory it tried to reveal to Lee the reasons behind the Prank, and why Lee is a key to all the conspiracy behind it which goes as far back, as the day Lee was born. Tazelwurm even gave Lee back his phone which he had used to lure him into the basement laboratory in the first place. Based on the fact that it seems to be kept in the laboratory he may also be subject of research and experiments like Lee and the Prank Song.

Despite it's name the Red Tazelwurm's skin is closer to burgundy than red in colour.

It's upper body structure is similar to a human's, while it's lower body consists of only a tail. With no legs it's tail is used for movement using a motion similar to a snake. The Tazelwurm also has opposable thumbs and what appear to be horn-like ears on top of it's head. It's eyes consist of yellow irises, black scleras and slitted, black pupils.

It was noted that the Red Tazelwurm has whiskers. According to myths, these whiskers can repel and undo curses.

For the most part the Tazelwurm seems to be aggressive, brutish and territorial. However underneath this, the Tazelwurm is a very intellectual character though it's up to speculation on exactly how exactly intelligent it is, it's at the very least intelligent enough to operate a cell phone.

Throughout season 3 more on this character's personality is shown. Softening up to the students and doing them favours along with occasionally licking the people who aid him. He has taken a personal liking to Lee, and has started a very unique friendship with him. however he can still be vicious at times, as seen when he attempted to bite Cam.

The Red Tazelwurm is noted to being a vicious and powerful predator, even terrifying the 15th graders (whom nobody dared to mess with) and can take down cleaners with ease. While mostly putting up the facade of being a mindless predator, the Tazelwurm is actually highly intelligent and has great knowledge of both the school and the prank conspiracy. In addition, the Red Tazelwurm is immune to the Prank Song, though it does seem to become enraged when it hears it.

While Lee was hallucinating from a flu the Tazelwurm appeared to be able to talk, although it hasn't been seen talking since so it can be assumed that it was a result of Lee's hallucinations. Though the Tazelwurm's ability to talk should not be confused with its intelligence, more likely the Tazelwurm simply has a similar voice box to humans and as such can modulate their sounds and voices to match the human language. 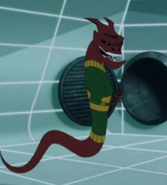 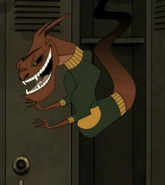